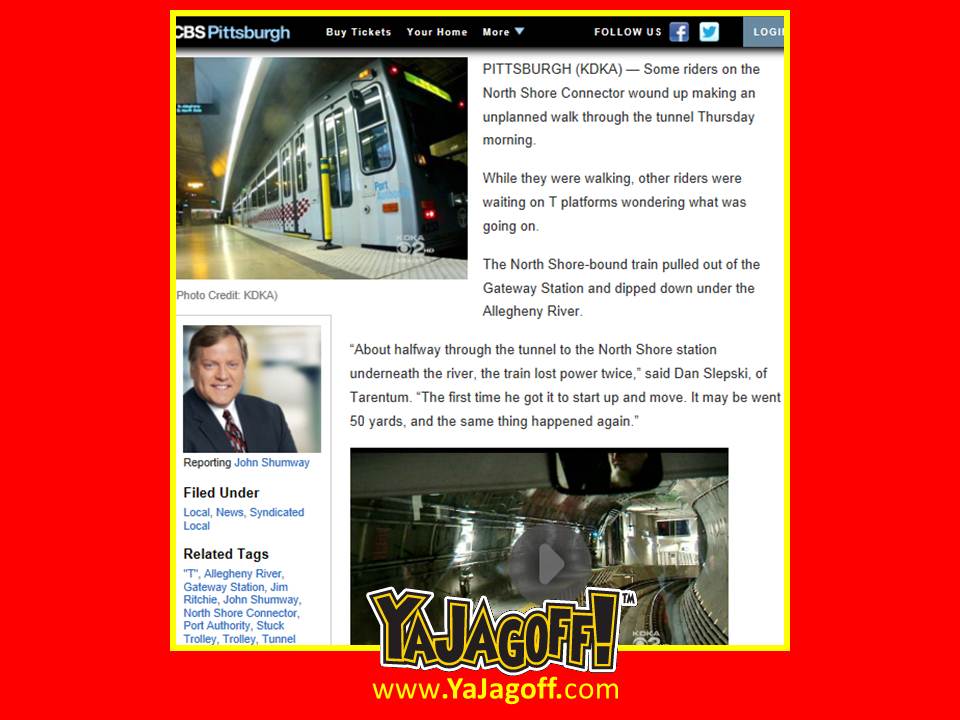 Well, sooooo many people (including us) have picked on the underground, 4-stop Pittsburgh subway track that’s called the North Shore Connector.  From the time the project was announced, thru to the day it left a bunch of runners stranded to.. well…we could go on and on… it’s been a topic of many jokes!

“We were stuck down there for 45 minutes and the alarms were going off,”

The Port Authority’s Jim Ritchie says the train was stuck because of a mechanical failure, and to add insult to the situation, a false chemical alarm went off at the same time in the Gateway Station.

And the BESTEST one:

“For some reason, the communication to customer service was an hour behind; so they didn’t know for an hour that there was something to tell people waiting at the platform,” Ritchie (Port Authority Spokesperson) added.

And the funny thing is, in an article about the SAME TOPIC in the “News Paper Whose Name Is Now Banned By Us,” they make it seem like this was no “big duh!”

Port Authority spokesman Jim Ritchie said there was no service from about 9:45  a.m. to 10 a.m., when officials started running a shuttle car back-and-forth on  the outbound tracks. Service was completely restored by 11 a.m.

Mr. Ritchie said delays were minimal and that the trains were about five minutes  off of schedule.

By the way, one idea we have is to take an extra $200 Billion, Gazillion, Trillion dollars and add glass panels to the underground tunnel.  Then it will be like the “Pittsburgh Zoo Aquarium Indigenous Water Creature And Auto Junkyard” exhibit!!!  Those broken-down-car-walks wouldn’t be so bad!

Back to the original point, we don’t know what TOTALLY happened and we don’t know if people waited over an hour (like in the KDKA piece) or 5-minutes off schedule (like in the News Paper Whose Name Is Now Banned By Us story).  And we know that sometimes stuff breaks down at inopportune times.

But what we also know is.. once again this North Shore is the butt of news stories, stories about poor performance and poor communications to its customers and, HENCELY, a butt of jokes.

We’re asking can someone please, PLEASE, PA-LEEEEEEEEEEEEEEEEZE find people to take the jobs at the Port Authority Admin offices, like maybe the dudes that run the H-O train set-up at the Science Center, that actually KNOW HOW TO RUN A TRANSIT SYSTEM, Ya Jagoffs??????