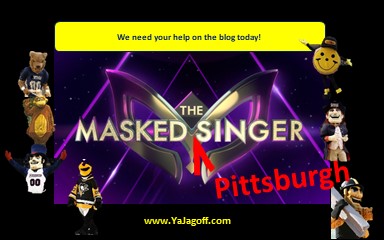 Recently, FOX debuted The Masked Singer, a singing competition in which celebrities face off against one other. The twist is that the contestants are concealed with elaborate (some may say creepy) costumes. When a singer is eliminated, he or she reveals their identity. In its first episode, the judges eliminated Hippo, who just happened to be Pittsburgh Steelers wide receiver Antonio Brown. This got me thinking. What would a Pittsburgh-based The Masked Singer look like? Obviously, the costumes would be more Pittsburgh specific. Instead of a Peacock, Hippo, Lion, or Deer, the contestants would compete as:

This is where we need your help. Let’s say that there are eight contestants on The Masked Singer: Pittsburgh Edition. Who would you include? Please share your ideas of athletes, journalists, politicians, etc. in the comments section below. For the sake of this debate, please include only Pittsburghers who currently reside primarily in Pittsburgh (so apologies to Michael Keaton, Ming-Na Wen, Joe Manganiello, etc.)