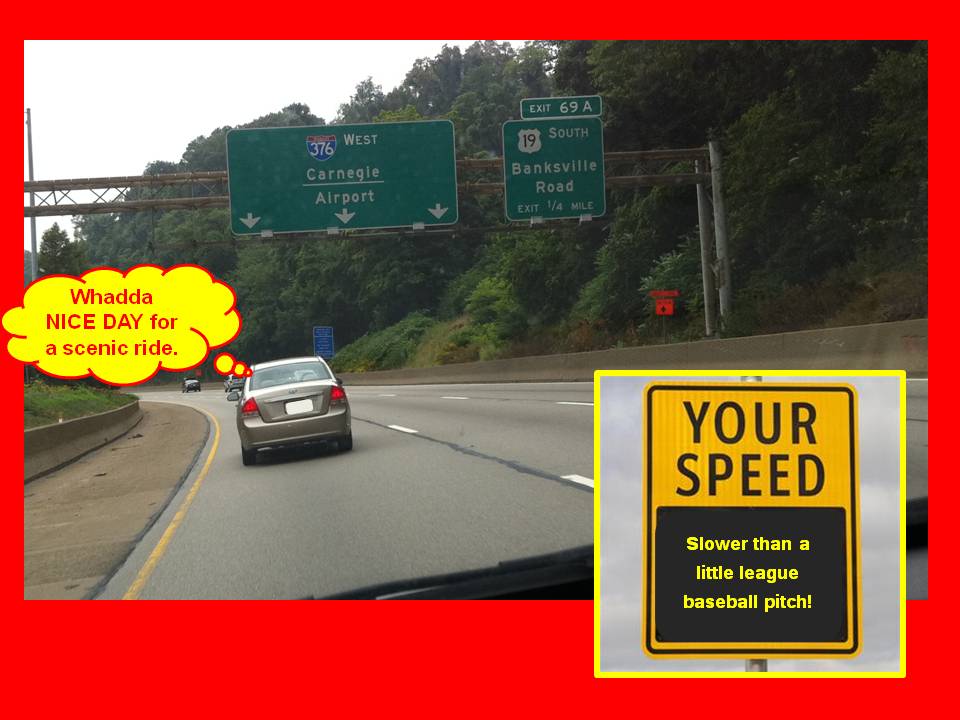 WOW!  No Jagoffs from yesterday’s Steelers game!!!  But no worries.  As Rodney Dangerfield used to say, “I got a million of ’em!”

How many times a day do you find yourself wishing you had lights and sirens in your cars so that you could pull over the car in front of you and NICELY explain that the gas pedal is the one on the right and that the car goes faster the more they press that pedal toward the floor?

O.K. so maybe some of us who do this SHOULD take some kind of course in “patience.”  (Like us probably)

On the other hand, the driver in the car above, we’re pretty sure, needs a brush-up Driver’s Ed class – where they explain the ratio of gas pedal depression as it relates to the angle of the inclined plane of the road in front of you!  Then of course, a driver courtesy brush-up explaining the #1 reason for being in the left lane —- PASSING ANOTHER CAR!!

We were behind this guy going through the Fort Pitt Tunnels, outbound.  (So there’s one reason for going slow – a tunnel.)  As we came out of the tunnel, we tried to nicely toot-toot our horn to get him to move his 40mph driving activities to the right lane.  Did he? NOPE!  We ended up going around him, passing him and giving him “THE LOOK.” He, then, looks back and flashes the single-fingered universal hand signal for “I-know-where-my-gas-pedal-is-I’m-just-terrified-of-using-it-And-I’m-kind-of-low-on-turn-signal-fluid-So-I’m-gonna-just-stay-in-this-lane.”

REALLY, YOU’RE DRIVING SLOW IN THE PASSING LANE and WE are the inconsiderate ones?

Hey “Lefty,” not sure if you really ARE a Duquesne University student like the sticker on the back window said.  If we were sure, we’d simply turn you in for a ruler-on-the-knuckles routine from Father Hogan.

But in the meantime, moving to the right is a actually a driving rule but, it’s ALSO something that you seem to be unfamiliar with, COMMON COURTESY, YA JAGOFF!

NOTE: Had a great time at the Billy Gardell show Saturday night, raising money for our favorite charity, Magee Women’s Research Institute.   Billy signed two of our “Don’t Be A Jagoff” shirts which will go up for silent auction, with some other celeb shirts, sometime in November.  Make sure you’re on our mailing list!!!! 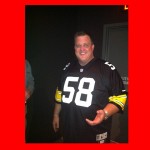