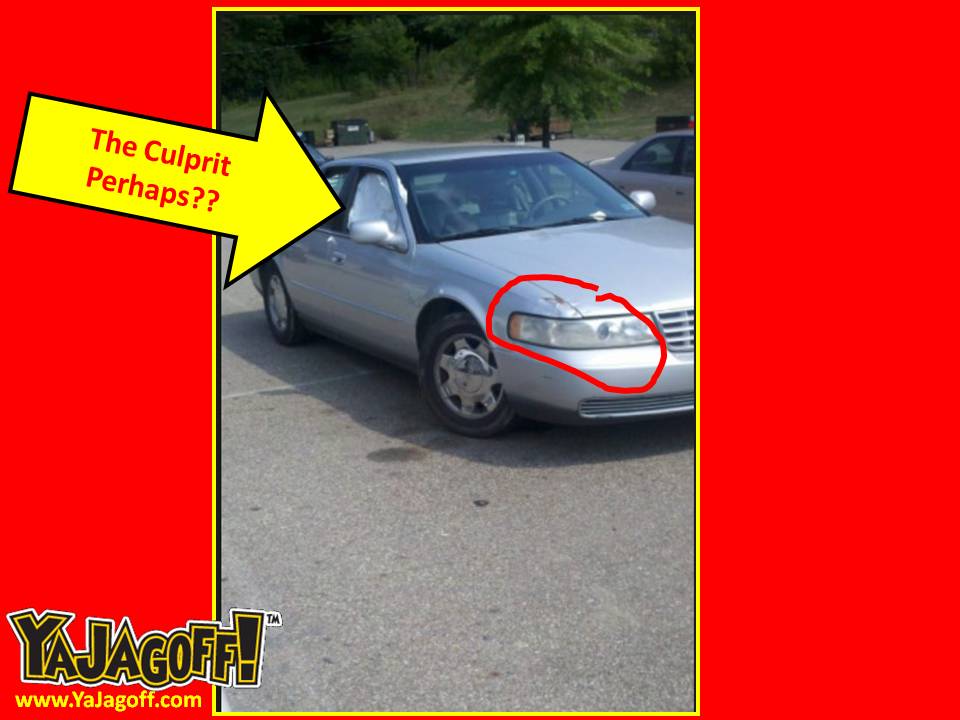 So we get this pic of yet ANOTHER “Peter Parker.”  But it looks like they may have a good excuse because something seems to be blocking the use of their passenger-side side-view mirror.  That ain’t no sun visor, that is a TRANSPARENT,  Egyption cotton, 1000 thread count, side window burglary deterrent device…. take THAT Mr. inventor of the Club Steering Wheel lock!!

But with the money to purchase that kind of window you’d think this horrible driver could pay one of those people with orange hand-cones that helps 747’s park at the airport.  Cuz, actually, ya left about enough room in the one square for a 747!!!!

Now we also notice there is some damage to this vehicle.  Hmmmmm.. the question is, did it occur before or AFTER the horrible park job?  Well, as it turns out, we secured the mall surveillance film on this one. And, we watched this car park.  As it turns out, before this driver parked here, they ran a stop sign as they entered the parking area, STOPPED at an intersection where there was NO STOP SIGN, went UP a down lane, dropped off a family of 6, that also needed to get purses out of the trunk, at the the mall entrance cuz, while 8 cars waited in line behind them THEN went and parked like this!!!

Ok.. none of that is true but you can imagine it was VERY possible.

As it turns out, we DID speak to this driver and apparently they are “bike friendly” and, when they heard about the new 4-foot space that drivers have to allow for cyclists, they decided to park this way to allow for cyclist to park their bikes on all for sides of the car.. with a 4-foot buffer zone.

Bottom line Peter Parker With High-end Window Dressings, we are VERY sure that most of the damage on your car is from you trying to park your car somewhere in the Lawrenceville or South Side section of the City.  We just hate to imagine the damage to the poles, fire hydrants, cars and City Paper Boxes that ya caused before you threw your hands up and chose to ONLY park in vast parking lots.  Our suggestion, go use one of those PODS to learn how to park and, before ya do that, find a good body-repair shop and put them on retainer, Ya Jagoff!!

Thanks to @SheepTheMoon for being our Honorary Jagoff Catcher this week.