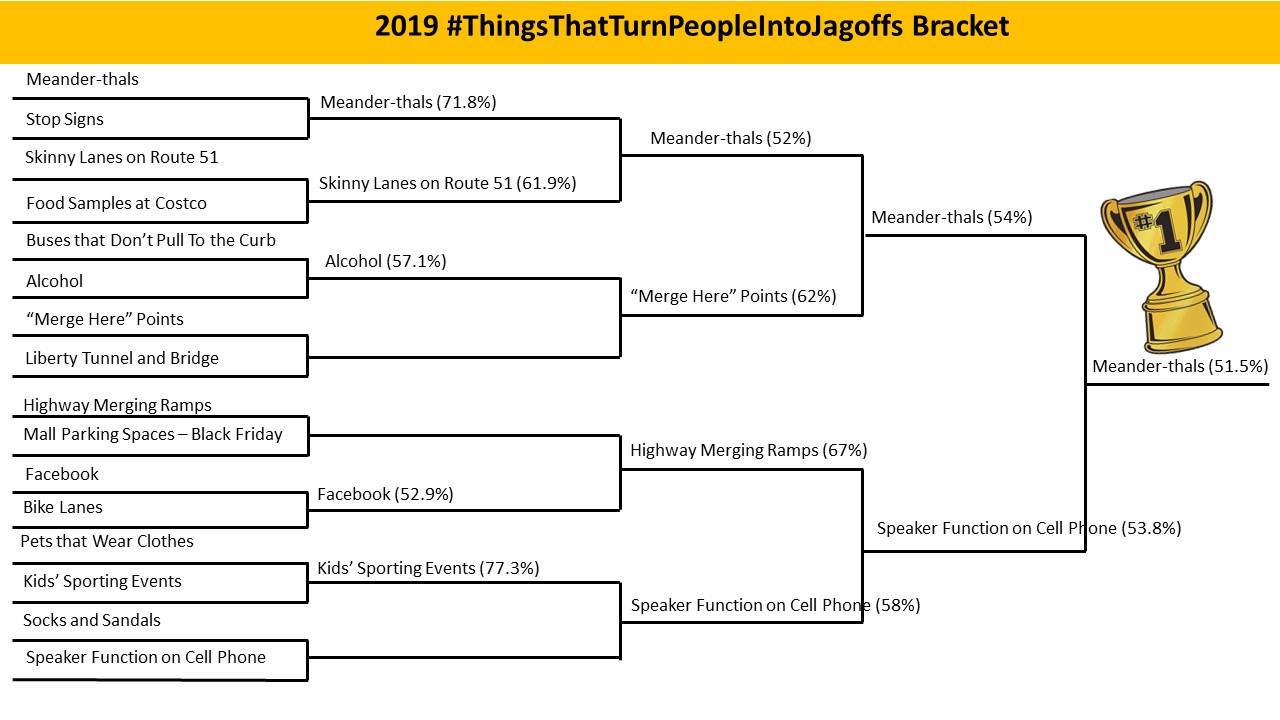 Congratulations to the winner! At just over 50%, it was a tight race.

If you’re just catching up by being new here, below are the other bracket participants. See ya next year!!

Skinny Lanes on Route 51 – because 1 in 2,897 drivers actually know how to judge the size of their car (from Stan, Virginia)

Alcohol (a contender every year) – pretty much a key “Jagoff Maker” on a daily basis. (Last year’s winner)

Liberty Tunnel and Bridge  – it’s a part-time tunnel and bridge. Is it open? One lane? Two lanes? We never quite know (from Stan, Virginia)

Mall Parking Spaces on Black Friday – There’s only 1 left and there are three cars coming from one end of the parking row and 2 more coming from the other end… uh-oh! (from Pete the Car Man, North Hills)

Facebook – It can be a good place to catch up with family and friends but…. (from @MixtyMotions, Twitter, Virginia)

Socks and Sandals – When worn separately, they are fine. When combined? Nope!
(from @MixtyMotions, Twitter, Virginia)

The Speaker Function on Cell Phones – We all don’t need to hear your convo!!!
(from @MixtyMotions, Twitter, Virginia)  – A

Kids Sporting Events– The kids are having fun. The parents? Urggggh! (from Sue M, Instagram)

Bike Lanes – Here’s another one.. when used properly, all good. When used incorrectly or placed in skinny roads? Hmmmmm! (from BurghJacks, Twitter)

Highway Merging Ramps– In other words, people that STOP while getting on the highway vs. yielding and getting up to speed to get on the highway (from Allie, D Facebook)

Food Samples at Costco – Food samples makes people NUTZ as they hover around and block the aisle just for a free cracker with chicken salad on it. (John’s Fav so it stayed on from last year)

Stop Signs – Especially… when you’re at one, trying to turn left, and someone squeezing in on your right blocking your view of oncoming traffic (from Kathy W, Facebook)