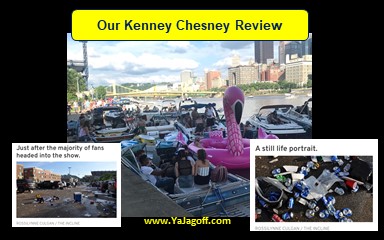 “Trash Photos” credited to ROSSILYNNE CULGAN who ALSO wrote a fun summary of the day.

Everyone is talking trash on Chesney; the aftermath of the concert that is.  Since the first concert here a few years back, when attendees turned North Shore parking lots into trash heaps, the Chesney concert has been trash talked.  At Ya Jagoff, we don’t discriminate about the many things wrong with that concert.  Don’t get us wrong, the music line up is bar none a country dream, but the trash talk ignited the need for a jagoff top 5 sights to be seen at a Chesney concert:

5) Scantily dressed rule: Some higher force must send out a memo to everyone of every shape and size that says anything goes and the less clothing on the better.

4) If the wear almost nothing memo is missed, wear red, white, and blue. In some cases that means your speedo for a man and a simple handkerchief on top for the ladies.

3) Boats of all sizes are present. This is the triple-decker showing with people hanging from each floor down to the almost kayak-looking row boat-ish contraption used for the river simply to dock and listen to concerts without paying.

2) Trash hanging out of every large garbage can and collecting in piles that were named garbage piles by the garbage tossing attendees. Apparently 25 tons of trash that includes empties, empties, and more empties, along with snack debris and so much more.

1) To us, the most train wreck sight at a Chesney concert is the “fight.”  It is the drunken debacle that transpires between siblings, parent/child, friends and especially boyfriend and girlfriend like we witnessed of a woman slamming her boyfriend’s face into a fence and continuing to fight until he became so frightened that he ran from her!

We can’t make this up.  We call ‘em as we see ‘em, and while Chesney is a heck of a concert inside, it is a jagoff circus outside!  Just clean up, ya jagoffs!

(Not much has changed!)