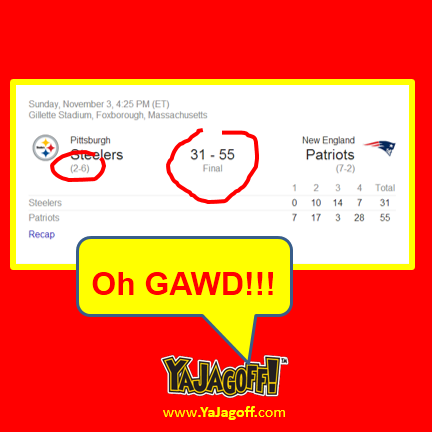 Yesterday I headed to Charlotte…. i.e, Pittsburgh of the South, thanks to our good friends (tongue firmly planted in cheek) US-we-screwed-all-of-Pittsburgh-Airways.

I landed in Charlotte… Steelers update said the game was a tie.. BOOM!  I headed directly to The Locker Room Steelers Bar on Tyron Street.  Awesome huge onion rings.. or as my Aunt would say, UNGyin Rings, and cold… REAL COLD…. bottles of Iron City.  The place had quite a few yinzer fans and one lonely Patriots fan. 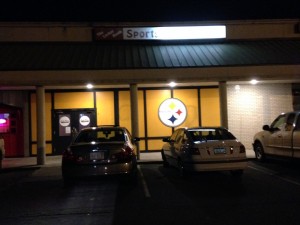 The Patriots fan cheered constantly.. loudly… and there was one older woman in the bar, decked out in Steelers gear that was beside herself about the Pats fan.  She started yelling at him as if she was a regular at the church bingo, playing 4,789 cards at one time, like she does every week and then some newbie kid, playing one card, who’s been JAGGIN’ AROUND all night, yells bingo for the $1,000 jackpot!  Yesssirreee, I thought she was gonna kill him with her bag full of dobbers!!!

But I digress… now that the Steelers are 2-6, we have to be very careful because the fact that Pittsburgh has 446 bridges (the most of any City in the world)…this means that some local entrepreneur, playing up on the double-dose of “Steelers are 2-6 and We Miss The Rubber Duck‘ depression symptoms, could sell every depressed Steelers fan their very own, personalized, 2-foot section of bridge, from which to commit the Pittsburgh version of Hari Kari.. (jumping into the water or on to railroad tracks covered in French Fries and cole slaw)!

But we won’t!!!  We’re gonna hang tough… like the sole Pats fan hanging out in a Steelers bar with the bing0-lady breathing down his neck threatening to cut the tendons of his chip-placing finger if he yells “Bingo” again!

So maybe this is a rebuilding year?

One of the Twitter-er-ers said it best….

I can’t imagine if social media existed with Kordell. Or Malone. Or Stout. Dear god.

Or as we would put it…unfortunately, the Steeler games for the rest of the season, are gonna be like 90-year old-lady cleavage… it’s ugly but we still have to stare!!

And let’s just face it right now… there WON’T be any MUST SEE Sunday, 1pm games this year, which means, there won’t be any excuses to cut out of Noon Mass early this football season!  Hang in there, Ya Jagoffs!!

Final note..we did a contest yesterday.. if anyone picked the correct score and who won, we were going to make a $50 donation to their favorite non-profit.  Nobody picked the right score. We will try again next week!