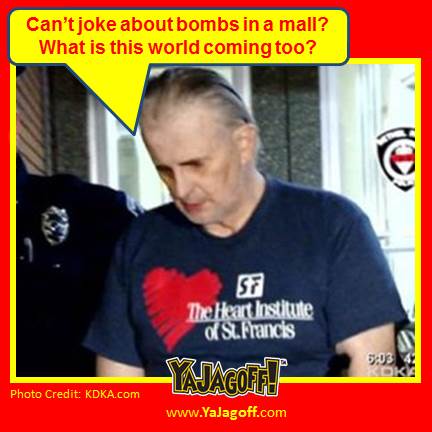 This story comes from the “What in THEEEEEEEEEEEEEEE hell was he thinking” file!

71-year-old Frank Zahler ALLEGEDLY walked into the South Hills Village Mall carrying a heavy briefcase and a gym bag.  So far so good!  But his visit to the mall goes to hell-in-a-handbasket when Frankie chooses to joke around about the fact that he has bomb stuff in his briefcase, just like the stuff in Boston.  See….you just said it to YOURSELF… “What in THEEEEEEEEEEEEEEE hell ?”

And when interviewed by the news people he says, “It’s crazy. I didn’t have anything. I was making a joke with the kid. These kids are whacky man, you know. What can you do with them? That’s America today. In my day, we would have laughed it off..”

OK.. maybe your day things WERE different.. but Frankie, Frankie, FFFFFFFFFFFFFFFrankeeeeeeeeeeeeeeeeeeeee…. do you read ANY newspapers?  Watch any  news on TV?  Listen to the AM channel of your transistor pocket radio or have you overheard any conversations from your fellow mall-walkers having coffee in the food court?

Sure in your day it was fun to Super Glue a quarter to the side walk and watch people try to pick it up. Quarters are almost irrelevant at this point.  And back then it was fun to take the apple pie off of the neighbor’s window sill and eat it out by the picket fence.  Now we have McDonald’s Apple Pies.  Back then, it was also fun to pull a kid’s underwear up their back, giving them a wedgie and embarrassing them by letting everyone see their underwear hanging out… NOW they let their underwear hang out on purpose…NOTHING’S THE SAME!!

But I’m PRIT-TEEE sure that joking about having a bomb was NEVER laughed off.

Frankie… good luck in the the County Jail buddy.  One thing to NOT joke about there is your expert-level experience at packing fudge for the Sarris Candy plant!!!!!!!!

And here’s another tip, if you ever board an airplane and see one of your morning-McDonald’s-bottomless-coffee-drinking-buddies, named JACK, sitting in the back of the plane, it will not be funny to say, “HI JACK,” Ya Jagoff!!!!!