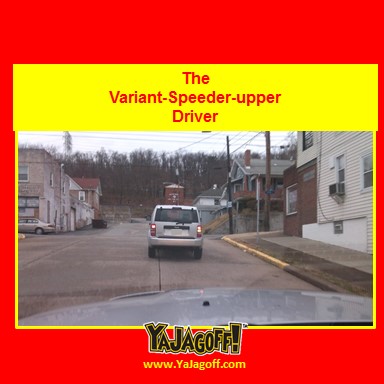 You know you’re in trouble when you’re on a road with 1 car in front of you and dozens of them behind you (and there aren’t funeral flags on anyone’s vehicle).  It’s pretty obvious who the bottle-neck is!

And then sometimes, you get that person who speeds up to the green light, then hits their brakes to scan the territory then goes through the intersection.  All the while, you’re wearing brake pads faster than a student driver in rush-hour traffic on Route 51.

We got the following email submission and the above pic about a driver on Christmas Day of all times:

Was following along behind this jagoff several miles…..guy was doing 35 in a 50 and refused to go any faster…..long stream of cars behind me…..I was following at a respectable distance…then the speed limit changed to 35…he dropped to 20 then would speed to 35 then to 20…..brake checking me several times….(or at least trying to…again, I wasn’t that close where it would matter) .

Then while going over some train tracks he abruptly jammed on his brakes, stopping me in the middle of the train tracks. All I can figure is he felt I was following too close? When I tried to go left around him he gassed it and blocked the way, then sped off to the right after I stopped. And on Christmas day yet. What a jagoff.

Yes… exactly the place to play “Cat and Mouse,” on the roads with a 4,000 lb vehicle.  Thankfully they don’t build REAL cars like the Kennywood Bumper Cars… where, if ya turn the wheel all the way to one side, it goes backwards and bashes the car behind ya.  This guy might have tried to use that function in some kind of My-girlfriend-who-I-just-spent-eighty-dollars-on-to-win-an-oversized-stuffed-animal-that-we-now-hate-carrying-around-the-park-is-in-this-car-next-to-me-so-I’m-gonna-play-tough-guy-driver move.

Merry Christmas! Santa was watching.  Hope your car is coal powered, Ya Jagoff!

Thanks to Dave for submitting the pic and the story on the website.

If you have a pic to submit, click HERE.

Don’t for get to check out our book of Jagoff stories on Amazon.com 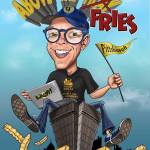