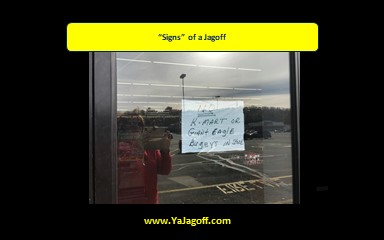 I seen a sign in the window that struck a chord. I think it was ‘upposed to say put your buggies back where they belong n’ at.

Not only did this sign hang in a Dollar Store window, two people discussed why it was wrong. The worst part? The sign is wrong and the conversation supporting it magnifies its wrongness! Ugggh!

Come on! I feel like in this case we have to play who’s the Jagoff? Is it the person who wrote this sign? This means a human being had enough with the wrong ‘buggies’ being placed at wrong locations.

Is it the conversation between two jagoffs dissecting the sign purpose?

Wait is it me? I confuse glaring and blaring and time to time I throw an ‘able’ at the need of a word that doesn’t belong….but I know a buggy is a cart and I am ‘upposed to know where that cart belongs. KMart labeled ones go to the KMart cart station, Giant Eagle’s (not Iggle) to their respective location, and Dollar store ones (no w in Dollar) should be easy….yinz can’t take them outta the store because of the long stick things that slam at the door jam.

Come to think of it, sign or no sign, discussion or no discussion, the dollar store too- small carts with long sticks that can’t leave the store are the problem. Why not make new carts to carry appropriate cargo and no sticks and we wouldn’t have this problem, ya cart-making jagoffs!