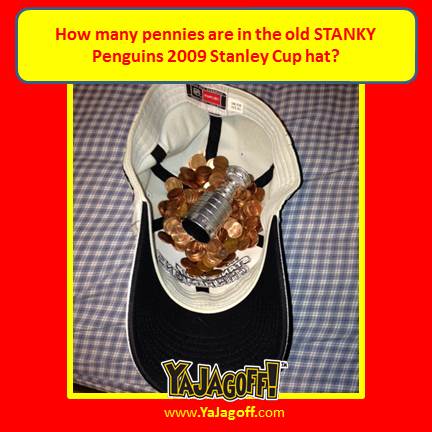 Yesterday’s blog post featured the above photo and a contest to guess how many pennies were in the hat.

Below are two videos of taking the stanky pens hat full of pennies and dumping them into the change machine at the local Giant Eagle.

The closest guess on yesterday’s comments was 257.

Now you MIGHT say, “C’mon, ya jagoff! That’s close, give the prize you cheap Jagoff!” And, to that we say, “Well, we never made any rules on what would be ruled as “closer”… rounding up or rounding down.“

Normally, we would NOT have awarded a prize here because the number wasn’t exact but, the fact that Kelli Brennan was 3 pennies off, and nobody else was that close, we are giving her the prize!

Thanks all for playing!