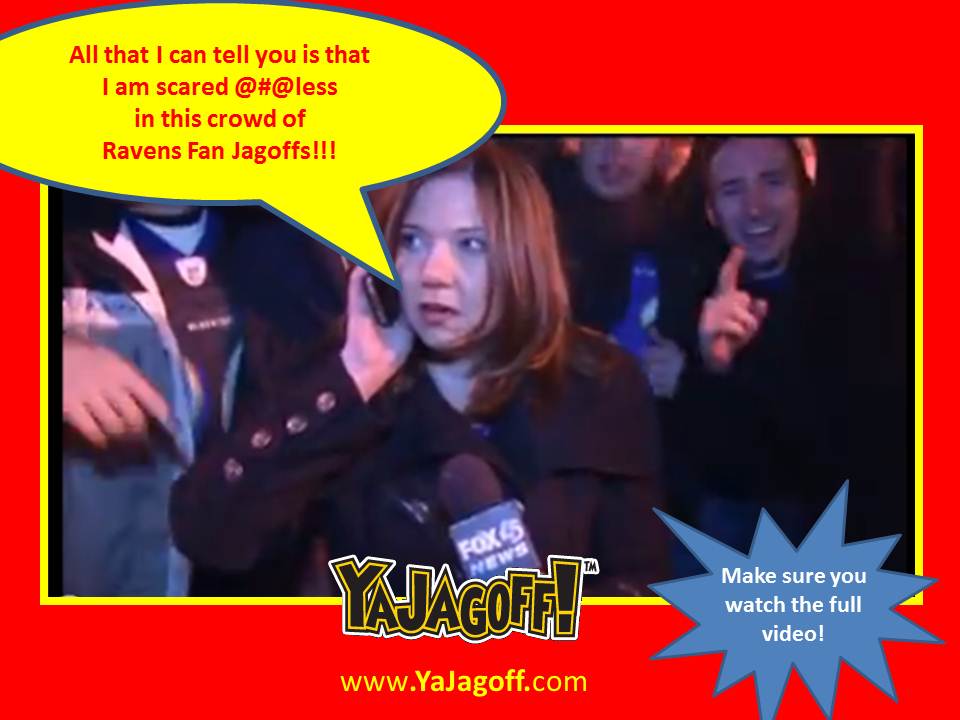 OK.. so winning the  (we said in yesterday’s that we wouldn’t mention it again) big football game played in New Orleans on Sunday is exciting.  Especially for the inexperienced fans.  What do I do?  Bang pots and pans like  New Years Eve?  Do I dump a large container of Gatorade on my pap like the players do to the coaches?  Do I head to some central area of town and scream and holler, high-five and fist-pound my buddies and thousands of people I’ve never met?

Well SURE you do if you’re a veteran at winning the championship.  But, if ya live in the , I mean, some town in Maryland that sounds like the Harry Potter character, Lord Voldemort, then you do STOOOOOOPID things!

Seriously.. watch video below of these novice celebrating fans….

As it begins you see the News 45 Reporter getting nervous

00:27 some knucklehead tries to climb the live-truck’s microwave mast

01:05 knucklehead fans chanting “U-S-A, U-S-A!” (Notice they are NOT chanting something like GO RAVENS!”)

End—– Frightened reporter is ready to become incontinent of stool AND urine!

So while we refuse to talk about what major sporting activity lead to this celebration, the GOOD news is, it doesn’t matter of we mention it or not cuz most of those in the video (the U-S-A chanters for example) don’t even know WHY they’re gettin’ NUTS!!

The best part of the entire thing………..they decided to get nuts, i.e. ruin a news truck WHILE ON LIVE TV AND BEING RECORDED FOREVER!! And, more than likely, for the court case that decides who pays for the new News 45 truck!!

Hey RATBIRD fans….good luck getting OR keeping that job after this video gets passed all around YouTube. Hopefully you haven’t invested too much into college cuz climbing-on-top-of-and-ruining-a-news-truck videos is PROBABLY a slight deterrent to some HR manager putting your resume at the top of the pile OR making the decision to NOT fire you.

Good luck in court when you get caught, “Dancing Queens.”  And one little tip on celebration jagoffery…..the next time you decide to act out, you MIGHT want to make sure it’s NOT in front of a live TV camera recording all the evidence, Ya Jagoffs!

We have brought back our St. Patrick’s Day Shirts.  Special Orders Only.