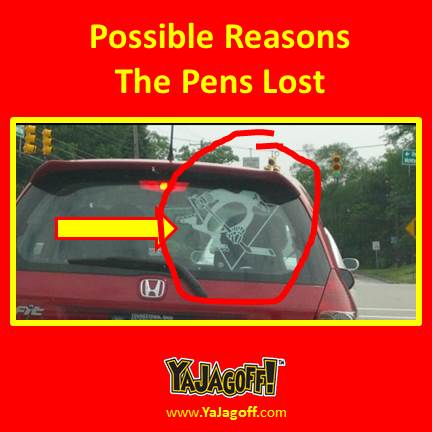 O.K.  The Penguins are not longer playing.  The players have moved out and now we sit and wait. But the radio and TV talk shows are full of brilliant ideas as to how “Tom, midnight caller from the North Side” believes Coach Bylsma should have run the team.

And, as I posted on Twitter and Facebook yesterday… the thing that TICKS ME OFF the most about the Penguins losing earlier than expected is, I had just finally figured out how to spell and pronounce Iginla correctly!!!  And now have ZERO use for that knowledge.

Well, I’ve been over this a thousand times and I think I’ve been able to summarize why the Penguins lost.

1) I always where a Pens ball cap when taping the Yakkin’ With Ya Jagoff segments.  Last week, I thought it would be cool to purchase a NEW Pens ball cap when we were interviewing Pens P.A. Announcer, Ryan Mill.  The last time I purchased a new Pens item during the playoffs, a golf shirt, the Pens lost game 7 of the finals to Detroit. Watch the interview HERE

2) Someone got the bright idea to sell sponsorship and special seats at the Pens outside TV event instead of leaving it just a free, crazy event like it used to be.  Kind of reminds ya of the whole flooding/ark thing!!

3) I started to plan a “watch the Stanley Cup Finals party” for my driveway BEFORE game one of the Bruins/Penguins series started.  Someone please tell Ray Shero to spare Coach Disco Dan and let him know that I bear this responsibility.

5) Finally, the driver of the car in the pic above.  All kinds of Pens stuff around town the past 3 weeks.  Logos EVVVVVVVVEEERRRRRYYYYWHERE!!  And then ya have THIS guy that buys a discounted logo somewhere and puts it on his car… and its BACKWARDS!!!!!!!!!!!!!!!!!!!!!!!!!  That was the clincher.  we have it on good terms that the “Hockey Gods,” when they looked down on Pittsburgh to check on our potential to be labeled as a “Hockey Town,” saw this guy and, yep.. you got it.. they held up their finger and their thumb in the shape of an “L” on their foreheads (Credit to Smash Mouth for that one) and said, “Let the Bruins win! So let it be said, so let it be done!”

So all of you can go ahead and blame ME for switching hats and planning a Final Round viewing party too early.  Blame a little on the Penguins for execution.  But……….Let’s ALL point the finger at the guy that put the logo on his car backward.  As my dad would say, BASS-ACKWARDS!!

Dude, logos are all over. You can’t look at one of them and get yourself a little guidance on how to put one on your car correctly??

It’s all because if YOU that the Hockey Gods blessed the Bruins to beat the Pens.  Enjoy your BASS-ACKWARD logo, Ya Jagoff!

FEEL FREE TO POST OUR OWN ADMISSION AS TO HOW YOU AFFECTED THE LOSS BELOW!

In this article: Because Its The Cup, Jagoffs, Penguins Lose To Bruins, Pens, Pittsburgh, Pittsburghese, Yinzers