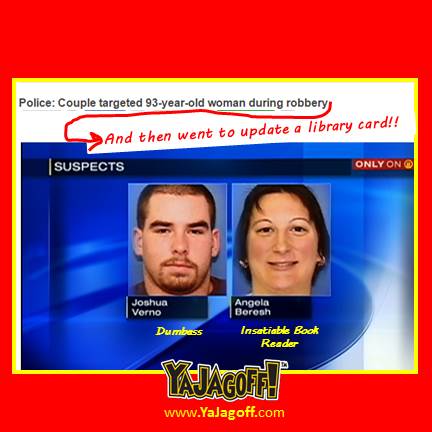 Warning!!  This story will tick you off.

This story has somewhat of reasonable ending….the two knuckleheads above chose to escape to a local library, changed their clothes (left their old one’s behind along with the woman’s bank receipt) and… here it comes…..then Angela “allegedly” felt that, THIS DAY, was the day she felt compelled to renew that outta date library card!

C’mon Josh and Angela… Bonnie and Clyde didn’t waste good criminal time with no stupid reading!  Reading is for losers…. oh wait….now I get it.

Currently, Joshy-boy is hold up in the local jail and Angie-girl, well, she’s on the run but, pretty sure that if the cops stake-out the library, it won’t be long before guilt overwhelms Angie-girl of having her library books overdue… “Good to Great,” “Animal Farm,” “Atlas Shrugged” and they simply nab her.

Should there be jail time?  Maybe… but, we think their 93-year old victim should have the pleasure of return torture, but torture that she wouldn’t have to go to church and confess as a sin… like…

She gets to make you both eat nothing but prunes, cream of wheat, raisin bran and bran muffins for 8 days straight.  The key, she allows you access to a toilet but, that toilet is wired to a high-intensity shock delivery system connected to the seat, the back, and the floor and is activated by moisture.  Oh, wait, you would actually be strapped to the toilet so that you had no other options.  At some point, she’s also permitted to whack your knees and shins with a rolling pin.  If for some reason she tires, she is permitted to sell “whacking” duty slots to people who bid on line…. which is how she would make her money back.

And since 93-year olds tend to be very familiar with the health advantages of enemas, after being released from the 8 days of “toiletry” you would be induced with sriracha sauce enemas!

Good luck with your dehydration and… um… library reading…in jail,  Ya Jagoffs!

Watch the video from Mayor Peduto