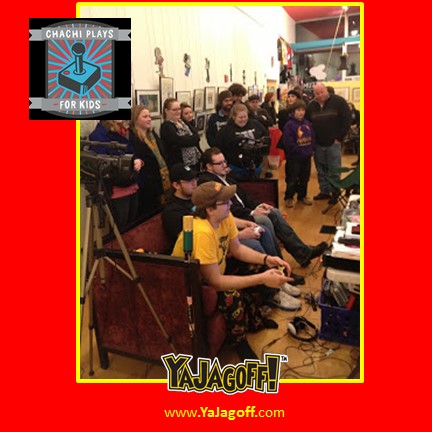 Chachi Plays for Kids is back for its fourth and installment,  is scheduled for May 9th and 10th, 2014.

The gaming schedule is posted on www.chachiplays.com, and is anticipated to be filled with a variety of games, including Tetris, Mario Kart and Street Fighter/Tekken tournaments. Event organizers have also announced the Chachi Open – an 18-hole game of Wii Golf.

This year’s benefactors will be  ToonSeum  and Dreams of Hope.

Watch Chachi’s intense work out as he gets ready for the gaming marathon!

Chachi Plays for Kids began four years ago when Anthony “Chachi” Walker’s decided he wanted to do something to help improve the city he loves. “I just wanted to do something to give back to the community,” said Walker. “There are plenty of  kids out there who don’t really get a childhood, either due to economic or societal situations they’re in. If I can give those  kids an opportunity to be a kid, that’s what I’d like to do.”

The idea for a video game marathon came from Child’s Play (www.childsplaycharity.org). Mr. Walker realized it was the perfect opportunity for him to combine his love for video games and support his community. “It’s a great feeling at the end of  the day to know that I was able to help make some kid’s day a little better,” noted Walker.

During the inaugural event in February 2011, Mr. Walker raised more than $2,700 for the Mario Lemieux Foundation as part of the Make Room for Kids fundraiser and was acknowledged for his efforts by the Pittsburgh City Council.  Last year’s event raised $4,357 to support the ToonSeum and Art Expression.

Comment below for a chance to win the YaJagoff spot to play!

Event sponsors include the Toonseum  and Sorgatron Media.