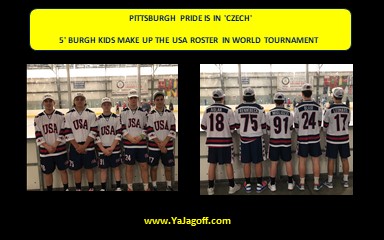 Today we step away from the Jagoffs to send these 5 gents off to the Czech Republic to represent Team USA!  Written by Rachael Rennebeck, mom of Alternate Captain for Team USA, Roman!

A four-year-old Roman and five-year-old Hammer had little knowledge of how to hold a stick, let alone use one in 2007.  The two quickly learned that their grandfathers grew up together and were friends, which was enough detail to keep them interested in dek hockey for the rest of the season at Team Pittsburgh. Oh, and dek is simply a surface thing, not a misspelling, and requires running instead of skates.

Next thing you know an Ingram kid, who simply played ball hockey on his street, was a late add on to an inhouse team ended up being a RINGER named Migs. The three competed locally and then on travel teams together, and a handful of years later caught a glimpse of speed from an opponent named Dom Leonard.  Dom decided to turn to the black and gold and an all Italian line with Roman, Migs and Dom was formed. With Hammer, the four became some of the most talked about dek players in Pittsburgh, and so was another fast kid with a hard shot, Zack Blair.  The problem was he hailed from the ever-difficult opposing team from Penn Hills.

All five joined the ranks of 200+ hockey players aging from 14-16 representing Pennsylvania, Illinois, New Jersey, New York, Massachusetts and more to compete for a spot on the coveted U16 USA Ball Hockey Team.  After almost a year of tryouts in various cities, 20 runners and two goalies were selected to represent Team USA in 2018 and compete in the Czech Republic. This was no façade, Hammer, Roman, Migs, Dom and Zack were among those listed.

The four Team Pitt boys were surprised to learn that Blair was joining the Team Pitt ranks locally—creating an unstoppable handful of young men proudly representing not only the Team Pitt black and gold, but now the red, white and blue.

These five will play against the best from Poland, Great Britain, Canada, Slovakia and Czech in the World Junior Ball Hockey Tournament in Europe next week.  The top three teams will win bronze, silver or gold medals and gain bragging rights as the best in the country.  Not bad for a few young boys who played dek hockey at Team Pittsburgh for something to do. Now on their to do list? #QuestForGold