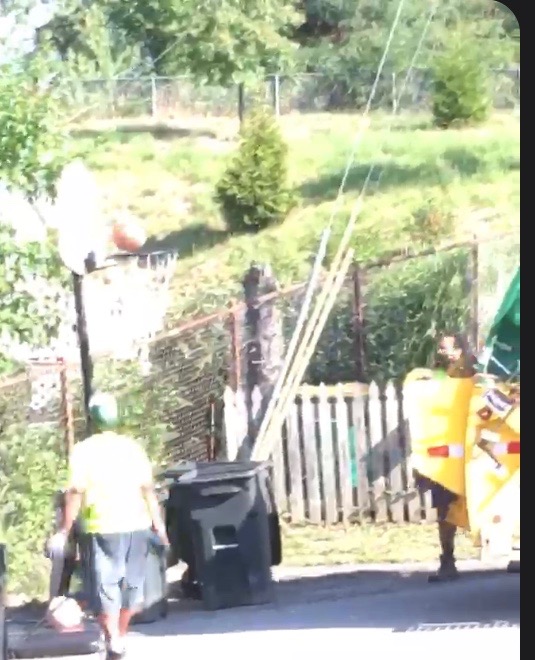 Today’s blog by Rachael thanks to her neighbor’s camera!

We cannot stress enough that the word jagoff is also a term of endearment. It has almost become our mission to educate yinzers, ‘Burghers, former Pittsburgh natives and beyond that when we say how are you doing ya jagoff?  We mean it nicely and in a welcoming manner.

Granted, we use the term when referencing mess ups, absurd parking positions and crazy antics.  But we prefer it as positive.  Case in point, the Waste Management workers who sometimes get the bad rap of being loud when collecting garbage, don’t put cans back properly, blah blah blah!  I mean is it so bad?  Are these earth-shattering problems? Not so much.

A few weeks back, a neighbor’s camera caught this act and it brought me joy. After collecting garbage, this worker took a minute to shoot hoops.  No big game, no raucous, just a morning layup.  I mean if every morning could start with a slam dunk!

I see it as a metaphor. We all have jobs to do. Just do them. No negativity, no push back.  Just do it and then the day is a slam dunk.  Ok, it is not THAT simple every day, but instead of using our cameras to report and record negativity, revive smiles and positivity.  Use jagoff as a term of endearment, it will do you good. Oh, and if you shoot b-ball for cameras, make sure your layup is on point.  And thanks for putting the ball back, ya jagoff! ?