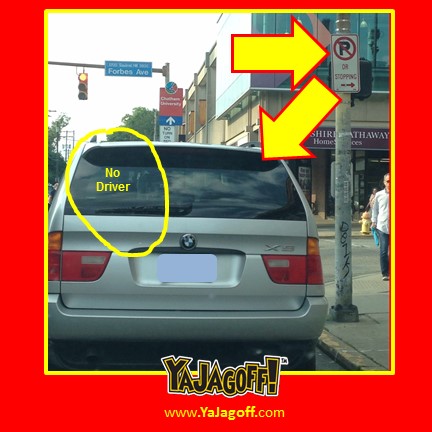 This strikes a nerve!  Here is the message that come with the pic submission:

At Forbes and Murray, this car was parked UNDERNEATH the no parking/no stopping sign, at a bus stop… With no hazard light on and a elderly passenger inside who gave US a dirty look for honking before we realized no on was in the driver seat.

Yesssssss… why NOT park there?  There’s plenty of room to drive around cars like you in Pittsburgh’s Squirrel Hill area—if you’re a subcompact version of a subcompact half of Smart Car (which by the way is the size of one of those grocery store baskets!)

Without the explanation, you look at the picture and probably ask yourself, “Is this person parked… and too far away from the curb or is this person just sitting in traffic?”  But armed with the fact that there is no driver, ya pretty much know this is total JAGOFFERY.

Is this a Squirrel Hill version of the “Red Box I’m Only Gonna Be a Second But Then Really Took 10 Minutes to Pick Out a New Movie” parking jobs that suburbanites do at the front door of Giant Eagles at shopping center grocery stores that have Red Box?

If you’re gonna sit and block traffic in the Squirrel Hill area, how about doing it at the outbound tunnel entrance where everyone ELSE is blocking traffic by stopping for no good reason, Ya Jagoff!

Special Thanks to Julie A for submitting the pic and being our Honorary Jagoff Catcher!