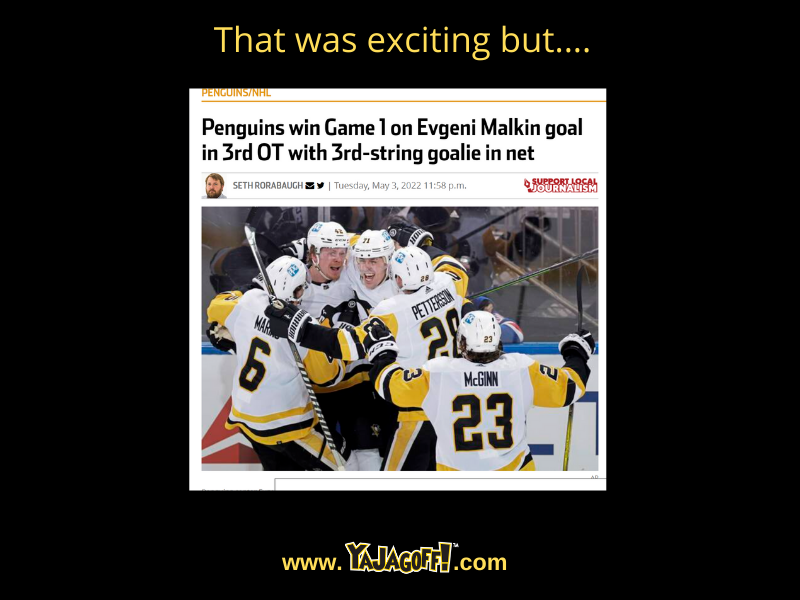 The entire day yesterday, I kept thinking that the Pens vs Rangers game was going to be fun, because playoff hockey is ALWAYS fun.  Admittedly, I had low expectations about the series.. was just trying to keep it real and be realistic.

Because of that, I didn’t prepare.. like.. I didn’t go buy a lot of beer. I didn’t get work done before the game because I figured I would need something to keep be occupied after the game was over and would be mad about losing game 1. In addition, I didn’t expected to be soooooooooooo stressed and keyed up so I didn’t go get the standard stress-eating food supplies like large bags of Wise potato chips and barrels of cheese curls.

Wo there I was.. no beer, no stress-food and the Pens involved in one of the most exciting hockey games I’ve seen.. oh.. and then they pull the gotta-bring-in-the-substitute-for-the-substitute goalie-cold-off-the-bench-in-period-six routine!  I was ready to chew on my couch cushion and TV remote like a 4-month golden retriever.

Well done Pens!! Well done!  And, as I look in the mirror this morning at my tired eyes from staying up to watch the entire game and not being able to go to sleep after the big win, I say, “Get to Sam’s Club for a #@% load of salty snacks before the next game and don’t you EVER underestimate the Pens again, YaJagoff!”