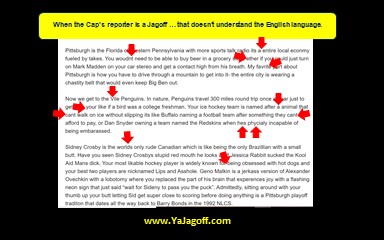 Yes! You usually get the YaJagoff Podcast here on Tuesdays but.. we have a special guest on this week and needed an extra day to get his interview recorded!  The podcast will be posted tomorrow!

Well, the Penguins vs Capitals 2018 playoff series did not produce our desired result. Then again, in this series, the Pen’s did more “coughing up” than a sever bronchitis patient that smokes 78 packs of cigs a day!

It didn’t seem that the Pens had it in them to 3-peat but, I just wanted them to beat and crush every childhood dream that Ovechkin had of progressing further into the cup round before he was old enough to get an AARP membership solicitation.

Also, would OF been great to take games 6 and 7 and post the grumpy-ovie face again here as a Jagoff! But…..

Even in a Caps win, which unfortunately they deserved, we find some Jagoffery!  A “professional writer,” known as @PFTCommentor, who writes for Bar Stool sports, and is clearly a Caps fan, published a typo-ridden-grammatically-abhorrent piece of $@#! article about Pittsburgh.

The cuts on Pittsburgh? Who cares?  The cuts on the English language? Embarrassing even to a silly blog hack like me!

Dudes (and dudettes) you all know that I am the master of typos! There are probably a dozen of them in THIS blog. But, my man is a national writer and you’d think that, if he didn’t have a proofreader, he could watch Wheel of Fortune for some basic spelling, grammar and punctuation rules!

We say, Small-pee-pee PFT, you’re probably a hero to Caps fans with your article.  It’s an easy position to be a hometown cheerleader sports writer. We guess that you giggle like a little school kid when your fans give you a pound and yell, “You da man! Nice SMACKDOWN!” It feels good to be popular doesn’t it?

By the way, SPP-PFT, we usually act giddy when we mess with people’s names on our blog but our attempt on yours, above, was admittedly pretty weak.  But so is that twitter name of yours.  So, given your journalism integrity and immaturity, I’m gonna get all GIDDY and propose one of THESE names from my 6th grade science notebook for you, Ben Dover, Harry P. Ness, Hammond Eggs, Phil McCracken and Phil McGroin, Lee Nover, and Oliver Closeoff.

By the Way, THANK YOU, PENS, for a fantastic, fun 2 years!