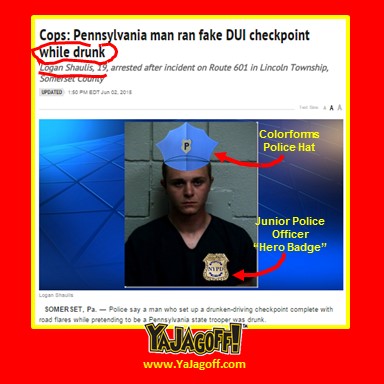 This is exactly the kind of news story that is behind why this blog was created…”Calling out the Jagoffs that are making the rest of us look bad.”

This guy’s story made it all the way to the USA Today.  But here’s a quick synopsis.

He set up his very own DUI checkpoint on a road in Somerset County, flairs, cones and all

He detained other drivers

Those people reported him to the REAL police

When the real police showed up, he shoved off his BB gun to the person that he had pulled over and said that he couldn’t be caught with the gun

He is now in jail with lots of charges.. not including the charges that might be on his debit/credit card for the alcohol he had consumed to give him his “beer muscles” and the right to carry a “beer badge.”

Seriously… I laughed hard enough at this story that I think I even had a little pee-trickle.  I was like one of those “yip-yip” dogs that get’s all excited when someone visits. As you can see, we used the Jagoffestrator to help the guy look like a real cop.

So, he told the people, that he pulled over, that his name was Officer Steve Rogers..which isn’t such a bad choice for a fake police officer name but, Lance Manion or Durk Winston would have been my choice.  For the record, Steve Rogers just happens to be Captain America’s real name.

Certainly the fact that “Steve Rogers” smelled like alcohol to the people that he pulled over was the first indication that something was wrong but, unconfirmed reports state that “Steve Rogers” also reached inside the pulled over cars, noogied the drivers head and then  reached further in and tightly squeezed  them telling them, “I love you man! We should hang out like this more often!”

Well Logan Douglas Shaulis, aka Self-appointed Honorary DUI Task Force Officer, things could have gone so much easier if you had just stopped at “underage drinking” under the high-school bleachers, puked at then went home a sneaked into your bed like the rest of your underage buddies.  But nope…

Then again, you might be on to something.  My grandmother used  a phrase, “It takes one to know one.”  Maybe all of the DUI checkpoints should have subject matter experts on hand …drunk people like you…to identify other drunk drivers?

Hope the cops gave you a whole roll of those Junior Police Officer Stickers, sounds like you might have a little time to play traffic cop in jail, Ya Jagoff!

The other day we announced a ticket give-away for the Renaissance Hotel Pittsburgh.

The picture was from the 1979 Pittsburgh move, “The Fish that Saved Pittsburgh.”

Soooooooo we had 3 pair of tickets to giveaway to this sold out event.  I put all names into my STANKY old Pens 1992 Stanley Cup Champs ballcap and the following people have won a pair of comp tickets to the Disco Evening June 11th.

Thanks to all who entered.

Winners please email us your name and address to YaJagoff (at) Verizon (dot) net for ticket details.