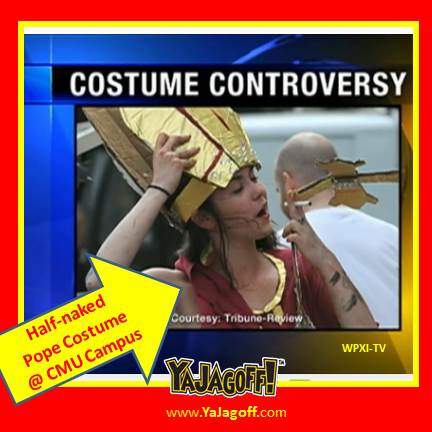 How do we address this in a tasteful manner?  Click  here (WPXI) if you want the full story from WPXI’s Cara Sapida.

CMU has put Pittsburgh on the map many times.. actors, writers, producers, software engineers, Randy Pausch, tech business start-ups, robots to outter space…. you could go on and on.

But now, CMU has made the international news for THIS girl who, during an annual tradition of parading in wild costumes, chose to dress like the Pope.  OK.. who DOESN’T fantasize about putting that one-of-a-kind hat on?  Those people, including mature adults, that want to parade around with the Stanley Cup soooooo much that they make one out of various stacked Tupperware Bowls covered in foil and pose with it would understand!

Second, she was passing out condoms to everyone.  Well…..(I need a minute, my face just went flush from writing that word).  OK.. so this was poor taste, at least for the costume theme, but not necessarily anything radical… unless she used PHEAA Student Loan money to purchase them.

But… here it comes…. she chose to go completely nude on the bottom half of her body… nothing.. nutta…zippo…zilch…. not even an attempt to cover up, as she walked through the Oakland Campus.

There’s the infraction… and.. for this, she is potentially in some kind of, undefined-as-yet, trouble.  At press time of this blog post (write before I go to bed), there was no confirmation on whether or not this girl has spent time interning with hundreds of 40-50 year olds that do similar things outside of a Jimmy Buffet Concert at the Star Lake or Chevy or WHATEVER-THEY-CALL-IT-THESE-DAYS Amphitheater.

Mind you, this “parade” is a family event!

I used to sit and think how CRAZY some parents must get when they spend all that money on their kids’ college and then they suddenly see their beloved son/daughter on TV at football games, drunk, half naked (from the wait up) with their faces and hair painted..yelling incoherent phrases while flexing their muscles in 25-degree weather.

By the way, the girl was unnamed so we are going to refer to her as Patty….

Hey Papal Patty, great work on standing-out in college and gaining notoriety for CMU again.  We here that CMU undergrad application submissions for young males is up 502% as compared to the day before your parade stunt!

And good luck at the Job Placement office upon graduation.

But then again, you may not need the placement office, WE think that,  if you can find an income tax company to hire you for next tax season, YOUR COSTUME might give those phony, Statue of Liberty sign-waivers a run for their money, Ya Jagoff!