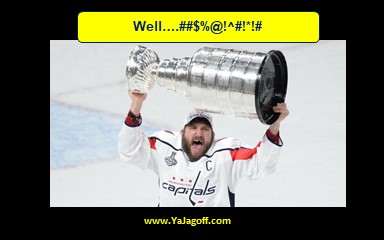 As Pittsburgh Penguin fans, we hated the Pens loss, but eventually dealt with the fact that a  threepeat was a pretty tall order.  Plus, let’s face it, the Golden Knights were the next best team to cheer on. The success story of their first year, plus the Flower and other notable Pens of course, helped Pittsburgh root for the underdogs.  But, the inevitable happened. After a tie game, Ovie and the gang called it over.  Then to put the bitter icing on the cake, Ovie got the Conn Smythe Award and pranced around the ice–I mean skated around with his earned hardware.  Let’s face it folks, it is deserved. Here are 5 ways to not diffuse being a jagoff about the recent win: