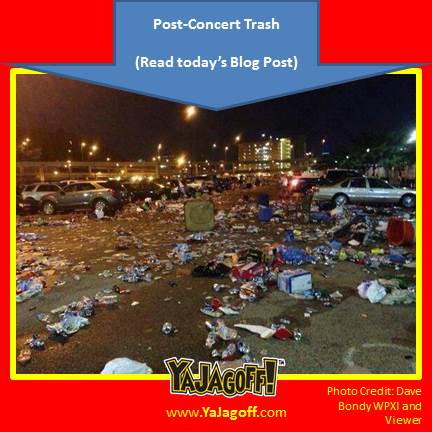 As you know, this blog was started to point out anyone trying to embarrass Pittsburgh!  Well……..the Kenny Chesney tour rolled through town this weekend which gets us to today’s blog post!

As usual for this concert, the world shut down ALMOST equal to when the Steelers are playing a Sunday game against the Ravens.  Tailgating, drinking, peeing in public, laughs, a few beer-muscle fights, etc, etc, etc.  You know the drill.

And when it was all over, the parking lots looked like the picture above.  You know, standard stuff…. you throw stuff all over the ground…..just like after you have a party at your OWN house.

Or, since this is graduation party time… just like when you’re done eating your Giant Eagle fried chicken, Nana’s homemade rigatoni and meatballs and Aunt Jean’s potato salad and cookies… you just toss your paper plate, utensils, napkins, drinking cup or can/bottle right on to their driveway. Standard behavior, right?  Oh, and don’t forget to leave a bra, pair of underwear or errant shoe somewhere in the mess too!

Yesterday, WPXI Reporter Dave Bondy, posted this photo on his Facebook page.  It was shared over 2,000 times and had thousands of comments… including people supporting the fact that this mess was substantiated by the fact that it costs $40 to park and that the cost  of cleanup is “paid for.”

Oh!  So with that same thinking, the more gift-money I put in the graduation card, the more garbage I’m allowed to throw around on the graduate’s YARD!

Some comments blamed the mess on COUNTRY MUSIC listeners.  Yes… THAT’S it, right?  And I guess all West Virginians really ARE related and have 1 tooth!  NOPE!

Let me take a minute to explain who the people are that left this garbage!

They are people who spent $329 on beer, $221 on food, $183 on bags of ice, rented DJ’s and RV’s and built customized corn hole games, wore $550 cowboy hats and boots and even spent $15 on lighted necklaces but thought NOTHING about paying $4.90 to get a box of trash bags that they could put their garbage in and leave at the lot for pick-up by official clean-upper-ers! (That’s my new word.. I own it.. feel free to use it as your own.)

These are also the same people who have a meticulously clean car and bitch if the kid drops a McD’s french fry between the seats!

These people do NOT need to be fined as some think.. they need to meet my grandmother who would think NOTHING of pulling the short hairs on the back of their neck, twisting them to inflict maximum pain, and not letting go until EVERY piece of garbage was in a bag!

And she’d be saying, “You better get this pig sty RED UP NOW, Ya Jagoff!!”

Express your thoughts below in the comments section.

This artwork by Pittsburgh artist, Justin Roach show’s our City at it’s best. 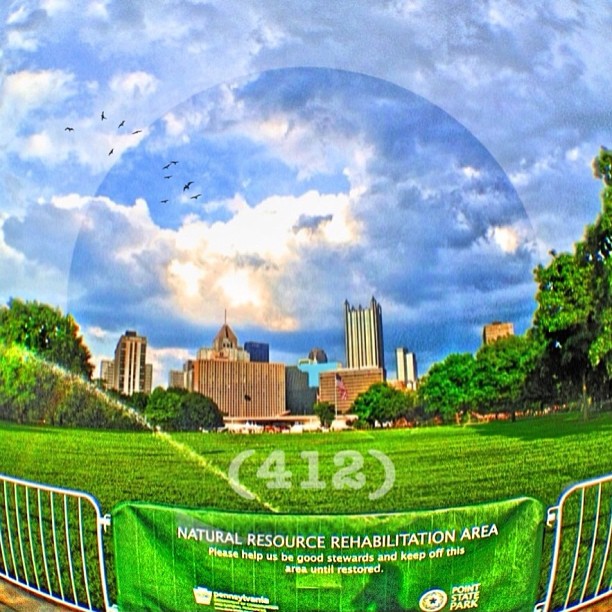 Click on the artwork to see this and other awesome artwork done by Justin.