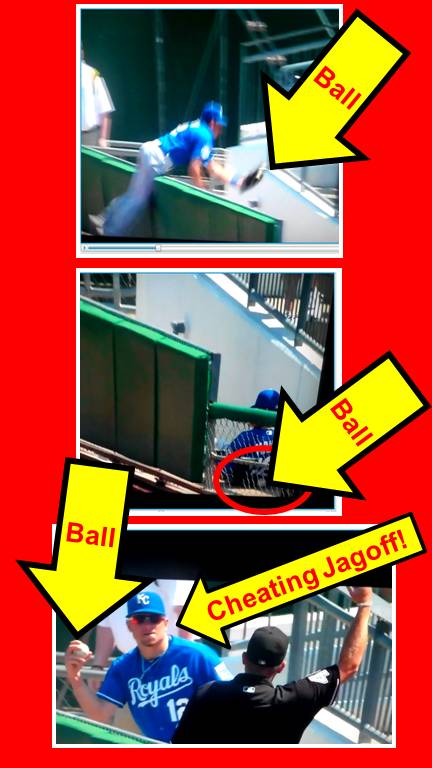 Yesterday the Pirates beat, no wait, did a SERIES SWEEP of the Kansas City Royals and the game was full of KC Jag… well.. we’ll get to that.

First, the 105.9 X morning show tweeted that, during the Pierogie Race, the Royals’ bullpen threw water on the pierogies.  Apparently they did it at all 3 games of the series.  What?  Totally classless.  I mean, EVERYONE knows you douse your periogies in BUTTER not water!!!!!!!

Later in the game, there was one of those, “grab the kids honey, let’s watch  a sportsmanship lesson” moments.

Royals outfielder Mitch Maier made what looked to be a fantastic inning ending flip-over-the-railing-and-hold-on-to-the-ball catch on the Pirates Andrew McCutchen.  (See Video Here) He went head first over the fence and, when he came up topside, he had the ball in his hand.  Even us fast-paced-hockey-lovers-often-bored-with-baseball fans were in awe.  The inning was over.

When they came back from the TV break and replayed the catch in slow motion, it was obvious that Maier dropped the ball out of his glove then picked it up faster than a kid picks up his very last Potato Patch cheese fry that dropped on the ground at Kennywood.  (Nobody saw NUTTHIN’ right?)

Wait, isn’t that, um, how do you say, CHEATING?

But all was for not.  In the 8th inning Mitch Maier was up to the plate with bases loaded…ready to be the game hero and heeeeeeeeeeeeeeeeeeeeeeeeeeee, GOT CALLED OUT ON STRIKES!!  Haaaaa.. like, not even swinging at the ball!  More like, STARING at the ball the same way a first-timer stares at the menu board at Primanti’s in the Strip District…. we’re talking jaw-open-cross-eyed-DAZED! Haaaaa.a…..(WHEEZE CUZ OF ALLERGIES)  Haaaaaaaa!

Some think the umpires should be Jagoffs on this.  NOPE, they couldn’t see it and he new it and stuffed that ball back into his glove.. um.. CHEATED!

So to Dewey-Cheatem-and-Maier and the Kansas City water-squirting bullpen and.. well.. EVERYONE from the Royals…take your mid-west-steak eatin’-cheatin’ ARSES on home.  And by the way, have fun hosting the 2012 MLB All-Star game in a few weeks. Maybe if you photo shop some of your players faces on some pics of REAL baseball players doing REAL things, you might be able to get some of your team mates IN the All-Star game without having to purchase a ticket, Ya Jagoffs!

Thanks to 105.9X Morning Show and Facebook Follower Sue Donaldson for being Honorary Jagoff Catchers today.