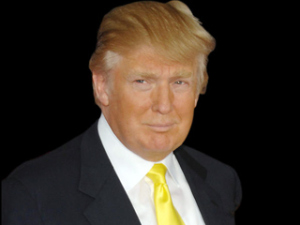 Since I did such a great job interviewing Ernie Ricci yesterday, Donald Trump’s apprentice manager, of his non-existing-presidential-campaign, asked me to interview The Donald.

By the way, there was one stipulation to the interview: Do not ask about or refer to his hair.

Being follicle-challenged myself, I had no qualms.  However, I was nervous that my eyes would constantly gravitate to his hair during the interview so I planned on picturing him with big boobs and cleavage so I would have something to stare at.

Here’s a transcript of my Donald Trump interview.

ME: Well, um, (throat clear), good.  You’ve been giving other candidates a lot of chatter so far.  The news is quickly making you out to be a little caaaraaazzy if you don’t mind me saying.   TRUMP: Hey, campaigning is not a sprint, it’s a marathon, did you ever see the story of the “Tortoise and the Hare?”

ME: Nothing, nothing. Let’s move on.  I saw the photos of your newly redecorated office.  It looks very lavish.  Will you want to redecorate the White House if you move into it?

TRUMP: Hey, I buy lavish stuff with MY money, not the government’s.  Actually, quite frankly, with how much taxes I pay, most of the government money IS mine.  But I won’t be like that.  For the White House, I just want the carpet to match the drapes!

ME: Never mind.  Do you have a favorite Little Johnny joke?

ME: You know, a Little Johnny joke.  I’m figuring nobody’s ever asked you that question yet.  My name is John so thought I would spitball here.

TRUMP: Do people actually tell jokes using names other than TRUMP?  If so, let me know, I’ll buy the rights to them and force them to have MY name inserted into all of them.

ME: Oh, I almost forgot.  If you were President, what would you do with Vladimir Putin?

TRUMP: I don’t care about him.  We’ll take him out easily.  We’re currently the laughing stock of the world.  This is business.  I will offer him asylum on the NBC Apprentice Show after I sue them and get it back on the air.  I’ll put Putin in a room with Gary Busey.  He’ll flip his wig!

ME: So here’s an example of a Little Johnny joke:

The teacher of an earth science class was lecturing on map reading.

After explaining about latitude, longitude, degrees and minutes the teacher asked, “Suppose I asked you to meet me for lunch at 23 degrees, 4 minutes north latitude and 45 degrees, 15 minutes east longitude?”

After a loooooong confused silence of kids staring at each other, Little Johnny shouted, “I guess you’d be eating alone.

TRUMP: See, I hate what’s happening to this country?  Every kid should have a GPS unit!

ME: But wait, that story isn’t true.  The real story is that my 5th grade science teacher was EXTREMELY hot.  Me and my friend Dirty Kurty used to flip coins over who would marry her someday.  One day we were going over maps and Dirty Kurty thought he was gonna get a leg up on me in the relationship when he complemented the teacher, who was wearing a dress that day, about the “MINK STOCKINGS” she was wearing.  As it turned out, she had not shaved her legs, probably for most of the winter, and lotsa wirey hairs were sticking through her stockings!!!  He had a GREAT time eating lunch, ALONE, while the rest of us were out for recess!