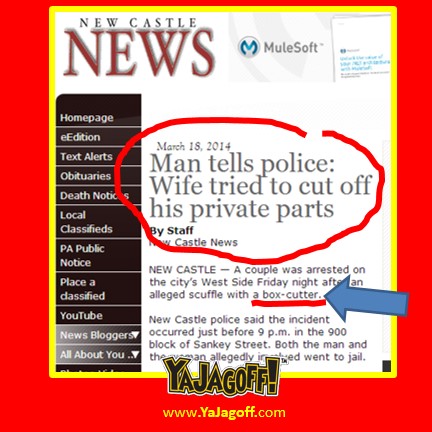 Well, if ya didn’t think THIS would make national news and embarrass the rest of us Western, PA’ers….

Police said Gerald Lee Orock Jr., 56, of Fombell, who was on the couch of the apartment, told them his wife, Lisa Jones-Orock, 39, of 327 Orchard Ave., Apt. 404, had tried to cut off his private parts with a box cutter.

The sad part for the guy is, it is now documented by police, that this his wife only needed a box cutter to do the deed.  You’d think he would have had the sense to bribe the cops into  documenting that his wife needed a chain saw, a pry bar and the New Castle Fire Department’s Jaws-0f-life to cut that through thing!!!

Not sure what led to such pent up anger, but hopefully, it’s a little more than Gerald beating Lisa in the “farting game” and Lisa being a sore loser when Gerald yelled, “Ooooooo you ate it!”  But, I doubt it, Ya Jagoffs!

And thanks to Kim @lipstklibrarian from Twitter for being forwarding this story and being today’s Honorary Jagoff Catcher!