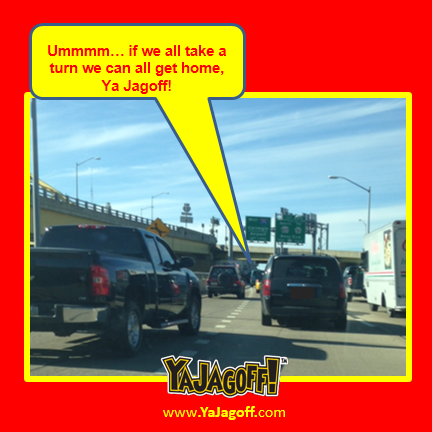 Another guest blog while I have Hawaii sand in between my toes.

I grew up in California. I’ve lived in Pittsburgh for 13 years, so I do consider myself a ‘burgher, but I lived in California first. You know what we have in California? Six-lane freeways. I’m talking six lanes in each direction of surging exhaust-spewing traffic.

And you know what people in that monstrosity of civil engineering are capable of accomplishing: MERGING.

For a city that prides itself on its friendly, approachable citizens, all that smiling all goes by the wayside once two lanes go down to one.  The concept is not particularly complicated.  If you are driving in the dominant lane, leave a little space in front of you, and you let one car merge.  If you are driving in the subservient lane, watch as the cars go right-left-right-left, and when it is your turn to merge do so. ONE car at a time.  And a friendly wave to the driver who let you in would not be too shabby.

Perhaps the narrow two-lane freeways leave you fearful that if you let a driver in, you will lose your spot and get forced off the road altogether? Or perhaps every car approaching construction carries a pregnant woman in hard labor? I would think that in a town of such friendly people, there would be some valid explanation for throwing all manners to the wayside when the time has come to combine lanes.

I still remain traumatized by a horrible post-Pirates game traffic situation.  I had the poor fortune to be leaving a theater performance at the same time the Bucs were letting out.  The garage was absolutely packed, with everyone heading impatiently toward the exit.  This particular garage had a spiral ramp, and as I was already driving in the spiral, I followed driving etiquette and, at each entrance, allowed a car to merge in.  On one floor, I let the next car mere in, and the subsequent car full of sopping drunk Buccos fans slammed on the gas, nearly sheared off the front of my car, and the driver leaned out the window and roared at me. I still don’t understand why, since I (unlike most everyone else in the dang garage) actually was letting drivers in. Pittsburgh, YR DOIN IT RONG.

You should go see  BeezusKiddo here where Elizabeth blog regularly about adventures in Pittsburgh!