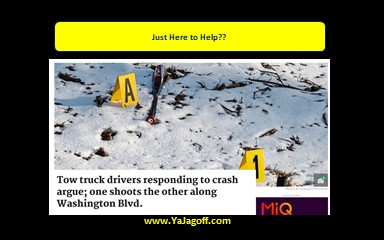 Hey.. had an accident? Need your car towed somewhere? Hmmmmm… “we’re here to help!” Well.. not so fast.

So there’s a crash inside the City limits. This means some tow truck drivers race to the scene faster than attorneys who have strapped themselves to a Wyle E. Coyote ACME rocket.

Are they there to help? Maybe to help themselves more than help others. Seems 2 drivers got into an argument resulting in them pulling out bats and a gun and such. Oh… and one of them getting shot! Well, thank GAWD they were there to help the crash victims.

Look… if this would have happened AFTER Brady/Bellichick won their 6th Super Bowl, well…. all bets are off at the level of anger.. (ok.. not shooting someone).

Guys…nice work on helping the crash victims keep their own emotions in check and having a calming effect on them. I mean, if you’re gonna argue, pick something like the Browns, Ravens or the Brady Cunch to hate on … not another Pittsburgh… at a car crash scene! It’s bad when you show up to “help” but go leave the scene with more injuries than the crash victims… YA JAGOFFS!!!