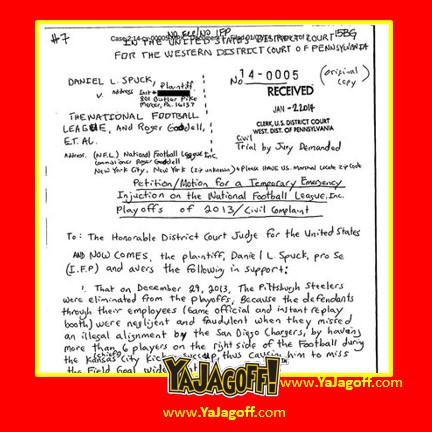 Only in Pittsburgh would this make news.  Well, that’s not actually true… this stupid story has made national news and, gets a spot here because it’s embarrassing to the rest of us Steelers fans.

an inmate from a Mercer County PA jail, has filed a law suit against Roger Goodell and the NFL, asking for Temporary Emergency Injunction on the NFL Playoffs until the Kansas City/San Diego game, or simply the field goal attempt, can be replayed, thus, potentially giving the Steelers a spot in the playoffs.

Yeah….are you thinking the same obvious thing as I am on this?  “Boy, with their Catholic background, are Art and Dan Rooney gonna be ticked when they see how bad this penmanship is.”

OK, that’s not REALLY what I thought when I read this and, ya already look pretty damned silly for not using a straight edge for those underlines!

Zachary Boso Who cares… I am more pissed that inmates get to watch TV.

Well, at least, in jail, someone’s around all day to wait for the cable guy to stop by sometime between 8am-5pm if they have a problem.

But my favorite comments were:

The only thing that didn’t come up on the Facebook page was, how far this guy’s tongue was probably sticking out of the side of his mouth by the time he got to the end.  Also, unfortunately ya can’t see the bottom of this to see if he got tired of keeping everything on the same line so added legs to some of the letters to make them all the same height.

Hey guy, we love your spunk and passion but….that poor penmanship is really embarrassing the SOAPWORD outta the rest of us in Steeler Nation.  Don’t ya know the old rule of writing a crazy letter… write, don’t send it, re-read it the next day, throw it away and feel better!!!!!

But here’s what WOULD have put you to the top of the heap on the internet… if you would get ol’ Roger Go-ta-hell in that jail of yours and give him a little “Scared Straight” routine!

(You get all up in Roggee’s face, spittin’ on his cheeks and stuff)

Now THAT, would have made you a reality star instead of making us all look stooooooopid, Ya Jagoff!!