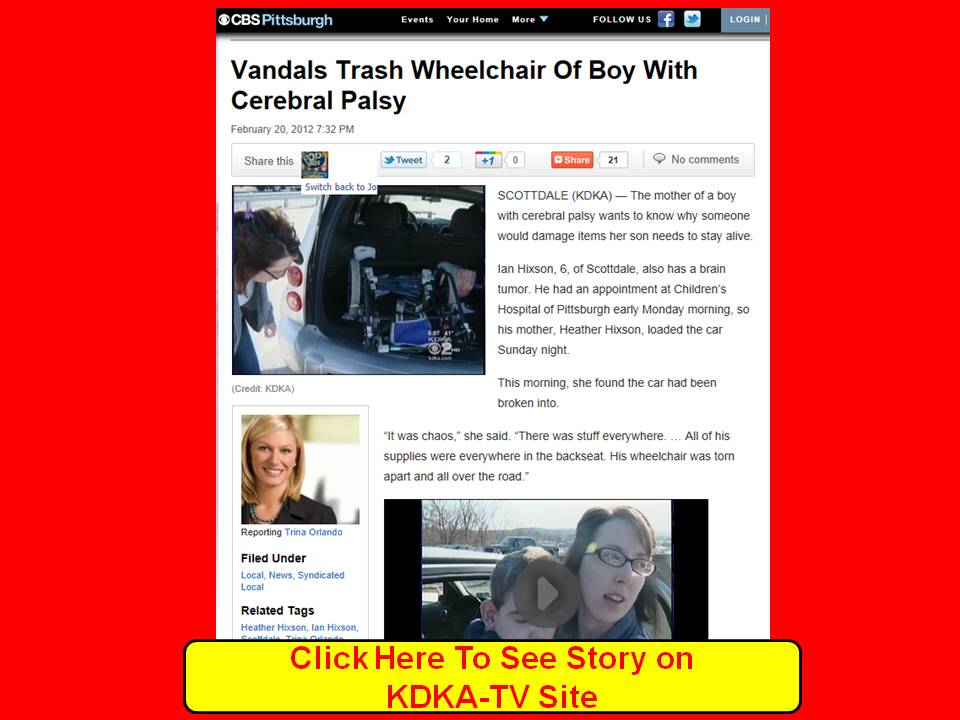 You can click the pic above to get the full story from Trina Orlando, KDKA-TV.  The short story is that 6 year-old Ian has autism and a brain tumor.  He had an early morning appointment at Children’s Hospital of Pittsburgh so his mother loaded the car the night before with all of his important stuff including medications and a $5,000 wheelchair.

While they were asleep, someone or some group of people, broke into a bunch of vehicles, including Ian’s.  They didn’t STEAL his wheelchair…. they ripped it apart and threw it all over the place. REALLY??????????????????????????????  So they got nothing out of breaking into the car.  They simply ruined the wheelchair and some of Ian’s other stuff including medications.

If anyone deserves to be in “Hell” it’s whomever did this.

Whomever you are, when you are caught (and why wouldn’t you be caught eventually you were stupid enough to tear apart stuff and leave it laying around) we believe that you should have to take care of Ian… feed him, bathe him, help move him around the house, read to him (if you know how to read) and help him go to the bathroom for the rest of your lives.  Some might say, people that would do this kind of evil should not be left alone to take care of a kid like Ian.  We agree.

So, we suggest that a stun-gun needles be permanently implanted into the base of the inside your nostrils (that part where it makes you cry when you pluck out a nose hair), eye lids and the most sensitive portions of your genitalia.  That way, when Ian’s mom thinks you are not treating her son appropriately.. or even if she just feels like she needs some revenge, she can press the button to discharge the stun-gun and keep you in line.

The other thing we believe is that you should be taught a skill… so how about you are taught how to put Ian’s wheelchair back together.  Once it IS back in one piece, Ian’s mother gets to strap you into the wheelchair, hitch the chair AND YOU to the back of her van with a 10-foot rope, and then drive Ian from his house in Scottdale to the Children’s Hospital (about an hour long ride).  By the time you get done bouncing around the concrete in that chair on all of the Western Pennsylvania potholes, there will be pieces of YOU all over the road but, nobody’s going to be able to know how to put you back together.  At THAT point, you’ll be BEGGING Ian’s mom to keep hitting the stun-gun charges so that you don’t feel the pain of your body and face that are 90% covered in brush burns, Ya Jagoffs!!!!!!

Thanks to follower Scott in Lancaster, PA (Formerly from Cranberry Twp)  for sending us this story and being today’s Honorary Jagoff Catcher!!!!