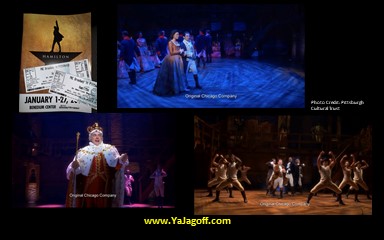 Today’s blog post by YaJagoff Podcast co-host Rachael Rennebeck. Thank you to the Pittsburgh Cultural Trust for access and for your hard work in getting this production to Pittsburgh.

There are those wowed with Wicked, then there are the Mamma Mia mobs, and of course the Phantom followers. But theater lovers and non-theater enthusiasts are coming in droves for Hamilton. Here is our take on the Hamilton hype:

Knew all the buzz
but didn’t sound like it was

the usual musical show,
with rapping and rhyming lingo.

Hamilton, Washington, and their women along the way,
add Jefferson, Maddison and King George’s sashay.

Historical peeps inherited fortune and some greed,
throw in some whiskey and a revolutionary war indeed.

That was Hamilton, the feared and the great,
the Pittsburgh musical proving worth the wait!

Da da da da da to the tune of King George hailing from our city
and the wardrobe and set design looking more than pretty,

the Constitution never sounded so exciting,
and war talk and battalion prep never so inviting

as to hear it sung by the all-star cast of Hamilton,
the non-stuffy musical easy to see again and again.

Washington so stern and poised in power,
and Jefferson with no intent to ever cower.

The ladies who loved and son who adored,
an action-packed music mecca with perfection galore.

The phenomenon gracing Pittsburgh, Hamilton, get ready for it,
don’t be a jagoff and show up late to see it!