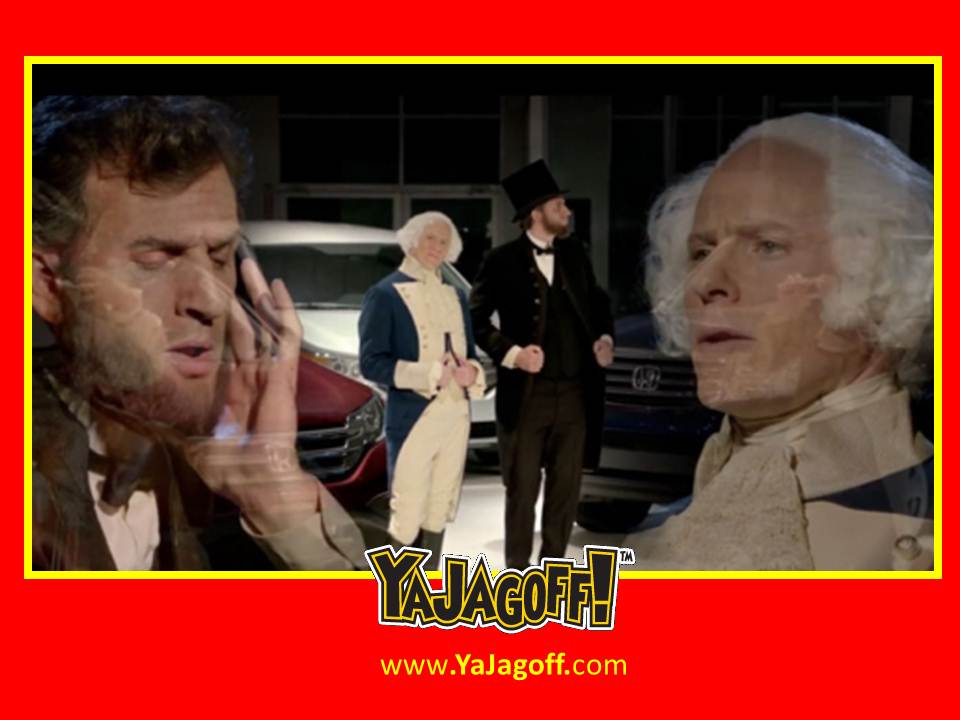 The goal of any advertisement or commercial is to get people talking.

Honda’s President’s Day commercial certainly has done that and much more.

My first encounter with the commercial was during a Penguins game Friday night. While posting a tweet, I hear the phrase, “Who’s your founding father?” spoken in a highly suggestive tone. Naturally, my ears perk up and I turned my attention to the screen.

What happened over the next 20 seconds or so gave me insight into what a computer must feel like when you have too many things open and it crashes. It was just total sensory overload as my brain tried feverishly to process what was happening on my television screen.

There were men dressed in colonial garb singing about Blue Tooth and Honest Abe talking like Barry White about the features of the vehicle.

None of it made sense. All I could process was that Honda was having a sale on President’s Day. My wife turned to me after it was over and we both started at each other as if to ask, “Did you see that too?”

There were several exchanges of inaudible mutterings, because there were literally no words to describe what we’d seen. We just tuned in to watch a hockey game and then this commercial happened.

As with anything that outlandish, you need to see it again in order to prove to people that it exists. I imagine the feeling I had (while waiting for it to come on again) was similar to the one people who claim to have seen Bigfoot or Nessie live with on a daily basis.  Something like, “If only I had a camera, I could prove to everyone I’m not crazy!”

Roughly 30 minutes later, it came on again and I was ready. However, I had assumed that Honest Abe was the only one speaking during the commercial based on my first experience.

There was George Washington asking me “Who’s Your Founding Father?” and I nearly blacked out. I had prepared for Abe Lincoln to say it. I was bracing myself and then got blindsided like I was skating through the neutral zone with my head down.
Honestly, it took me seeing that commercial about five times to appreciate that there’s a decent bit of humor in it. Though, I will say I’m happy President’s Day is over because I’m at peace with what I’ve seen. Who knows what might happen if I were to see it multiple times on a daily basis for weeks.

So, congratulations to Honda for achieving their goal of having a catchy tune get stuck in the heads of countless people, including myself.

The only real downside is Abe Lincoln now haunts my dreams.

What did YOU think of the commercial?  Comment below.

Our t-shirts are now black.  Click the pic below to get to the store for pricing.