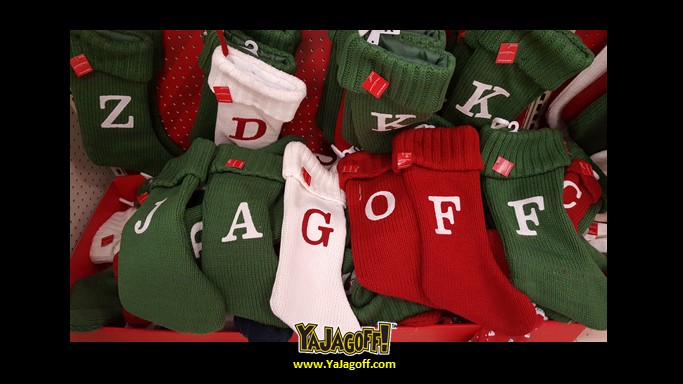 We are still rolling….if you don’t know what I am referring too, click here for the s’planation!

From well into enemy (Cleveland Browns) territory, we have another Jagoff Display.  Again… pee-trickle-puppy-on-Christmas-morning-found-a-twenty-dollar-bill-in-my-dry-cleaned-pants-pocket happy about this.  Especially the email that came with it!

I was thwarted in my efforts to spell out Jagoff at the Christmas Story house yesterday, but was successful at the Target store in Parma, Ohio.

To my delight, with the remaining Christmas stockings I was able to spell out “Jagoff”. What made this even more special to me, the lady standing behind me asked me what kind of name “Jagoff” is.  I told her it is a form of Pittsburghese and she just turned and left.

So, in case you don’t understand the first part of the email, the house, uses for the external shots for the Christmas Story movie, is near Cleveland.  You can go hide under the sink, etc, etc, etc. So our Honorary Jagoff-ier tried to spell out J-A-G-O-F-F inside that house with some blocks. But the blocks were glued down!

OK.. keep sending them in! Either message via Facebook, Twitter and Instagram OR email me at John@YaJagoff.com. Just remember, BE CREATIVE but don’t permanently deface anyone’s stuff! (Otherwise, we would have to post YOU as a Jagoff here!)

Thanks, much to Karen Mezatasta, a Parma, OH resident but a Pittsburgher at heart for being our