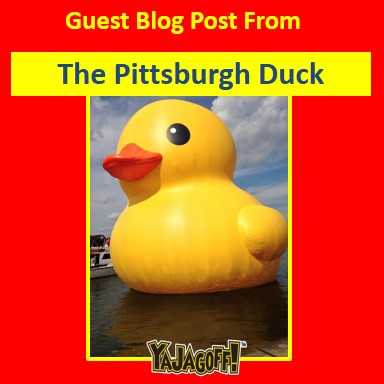 By the time you read this, I will be a deflated pile of rubber yellowness hidden in a secret location.  (Hopefully Jack’s Bar in the South Side!)

I had a great time here!  The party on the bridge when I came in.  The Pirates making all kinds of craziness.  The Steelers turning things around!  By the way… Do ya know what sound a Steeler Fan 40-foot Rubber Duck makes when ya squeeze him with 9 seconds left in a game against the Baltimore Ratbirds?  Suisham!!!

To be fair, I couldn’t really see the game last night.  My back was turned. Plus, I don’t really have eyes!  See the pic from @SteelerKibb below. But I loved all of the crazy yelling. 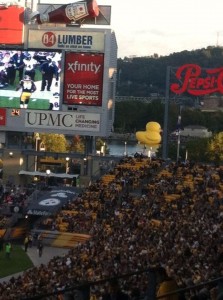 Thanks for all of the pictures you took of me.  I noticed in some of them that my butt looked a little big so, before I come back, I’m going to have to do a little extra swimming.  My favorite pics were when people tried to make it look like they were kissing me…

I can’t get the Katey Perry song outta my head, “I kissed a duck and I liiiiiiiked it!”  Haaa now it’s stuck in YOUR head too!

I also like the pics of people pretending to feed me stuff.  Except for the the now-fired Cincinnati Reds Manager, Dusty Baker, who tried to feed me a plate of foie gras.. only AFTER he tried to talk a bunch of kids into beaning me with baseballs!

The other thing that I noticed from all of the pictures, like this one, is that I need to start parting my hair on the Left instead of the Right! 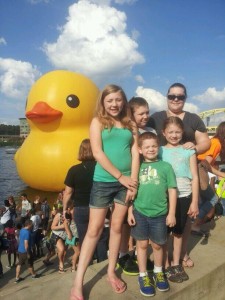 I like this pic too, of the kid doing the Duck Face taken by Leanne O’Brien.  It’s kinda Warhol-ian!! I dig it! 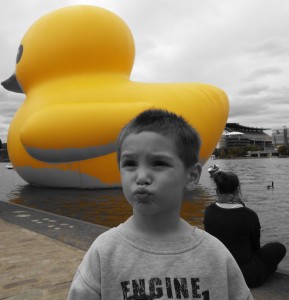 One of my favorite pics was from @MikeDarnay.. creating the Pittsburgh “Duck Dynasty.”  I kinda think me and Brett Keisel are doppelgangers, huh?

I’d like to come back and arm wrestle the Pirate Parrot, Steely McBeam and Iceburg for a Primanti Brothers Sandwich or some Pamela’s lyonnaise potatoes.  The only problem with THAT is, my wings are molded to my side so it wouldn’t be much of a competition I guess.

I would also like to come back to figure out what in the heck a Jumbo Sandwich is!

(Is this still in your head?  “I kissed a duck and I liiiiiiiked it!” )

Let’s clear up a few things..

No! I did not come here with underwater cameras implanted in me trying to secretly search for the missing B-25 Bomber in the Mon River.

No! I cannot stay and play on the Steelers Offensive Line… Mike Adams wouldn’t make a good stand-in for me either while I was over there playing.

No!  I don’t have ears…  sorry to reveal that after soooooo many of you have been yelling “Quack! Quack!” at me the past few weeks.

And let me give a QUACK-out to @Liz_G_Phillips who was an awesome Twitter-bud.  I never did get a chance hook up with her and her husband, John A. Phillips, and head up to the Elks Club for some Karaoke, one  of the nights after I got off work!

(“I kissed a duck and I liiiiiiiked it!”  Gotcha again!) 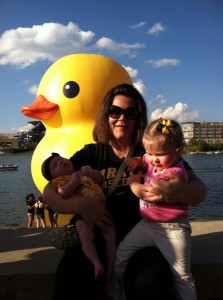 OK..time to get my warm bum outta this cold water…. it was starting to get a little irritating with all of the carp nipping at my butt.

I learned some Pittsburgh-ese while I was here.  I learned that,  The word Jagoff can be used in a few different ways.

So, referring to #1 above… thank you for welcoming me to Pittsburgh (and the United States)…. I had a great time.  I love yinz all, Ya Jagoffs!

Also a QUACK-out to Sandy Stuhlfire for giving me my parody name.  She won a contest on this blog when I arrived.