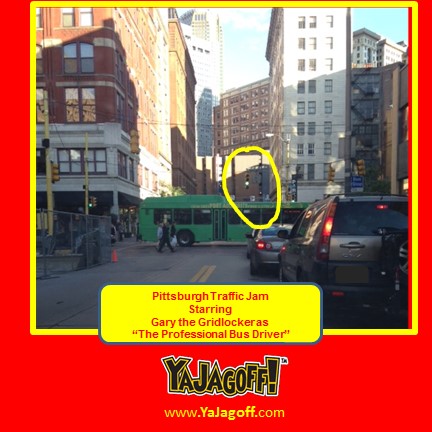 So this past Friday night, there were all kinds of activities going on in Downtown Pittsburgh.. Pirates Baseball, a no-rain-in-sight start to the Three Rivers Arts Festival, Singing in the Rain at the Byham Theater, Mahler Symphony No. 9 at Heinz Hall and whatever else happens in downtown.  Traffic was tighter than a jealous wife’s grip on her cheatin’ husband’s neck and crotch.

But.. it’s all good because the City is thriving.  And then it happens…. my hypothesis of “It only takes on bus to screw up traffic.”

Just like as if he was a soccer mom in an SUV at the Robinson IKEA, this bus driver pulls through the intersection on a yellow light and BOOM… we’re all going absolutely nowhere!

Seriously guy? On your days off, do you also “professionally” drive a landscaping pick-up with a 16-foot trailer that blocks all of the gas pumps during morning rush hour while you go get your coffee and donut?   You have the same tendencies.

What’s better than a jagoff driver?  One of us being there to snap a photo of him!!!!!  In the old days, I would have gotten REALLY mad at this but, NAY NAY, say me!!!  Now I just pull out the trusty iPhone and create a blog post!! (My local pharmacy blood pressure medicine dealer is NOT happy!  He may NOT be able to send his 4th kid to college.)

Well, Mr. Gary the Gridlocker, aka, I-am-a-professional-driver-And-you-can-tell-because-I-wear-cool-black-leather-driving-gloves, not sure what they taught you in bus driving school but we’re prit-TEEEE sure that it didn’t involve blocking intersections during rush hour.

Now THERE’S a solution, maybe we’ll buy Ya Jagoff signs to put on the sides of all of the buses.  Then again, maybe not Mr. Intersection-blocker, because that would be like putting a NAME TAG on YOUR bus, Ya Jagoff!!! 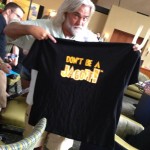 Friday was National Donut Day.  We asked people to tweet us a pic of them at a Dunkin Dounts.  All who tweeted a pic and tagged @DunkinPgh were eligible.  We’ve since placed all of the names into a STANKY Pens ball cap, swirled them around, held our noses, reached in and pulled the name of

Yesterday, a New Jersey dwellin’ Yinzer twitted the pic below and asked for a shirt. 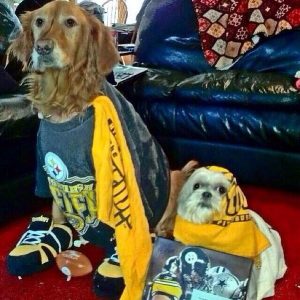 We promised if he got 30 Retweets, we would give him and one of our t-shirts AND raffle off a shirt to those who did the retweets.  Once again, we placed all of the names into a STANKY Pens ball cap, swirled them around, held our noses, reached in and pulled the name of

Jay and Jendi, email us at YaJagoff (at) comcast (dot) net with your t-shirt size and address.  Use subject line CONTEST!

Thanks all for playing along and for following the blog.