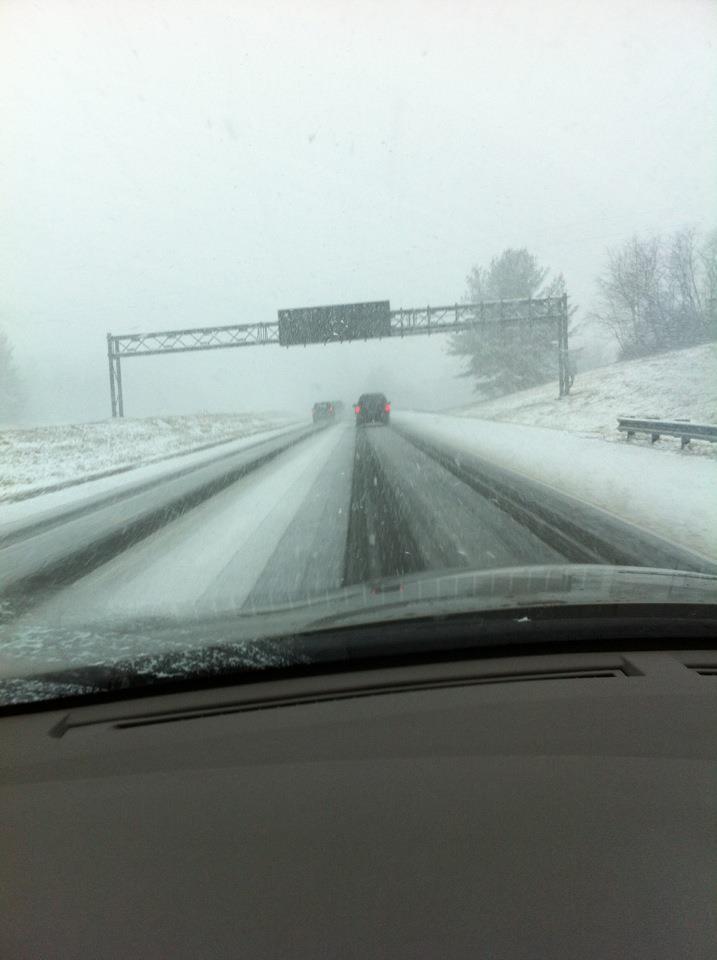 Those of you who follow on Facebook and Twitter know that, yesterday, we drove from Pittsburgh to Charlotte.  During our drive, we pretty much had snow and less-than-optimum conditions from Summersville to the Carolina border as you can see by the photo above.

First, you might be saying, “Why in theeeeeeeeeee hell would you drive to Charlotte from Pittsburgh vs. flying?”  To that we respond, “given the security check time, wait to board time,  baggage fees, just landed in Charlotte wait on tarmac while we wait for a gate to open and we hold our pee time, and the attitudes of some of the USAirways administrators toward Pittsburgh and it’s employees, we felt driving was the better option.”

The COOL part was, while the driving was a bit hary at times, it wasn’t too crazy… FOR THOSE OF US FROM THE NORTH!!!  But those not familiar with these less-than-optimum conditions, well, they didn’t fair so well.

Our favorite exhibit of “drivers that did not fair so well” would be the driver in the white SUV that was tailgating us, almost running over our backs, in the Virginia area on I-77, just before the North Carolina state line.  Given the driving conditions, we could not get a pic of his headlights in our review mirror OR when he passed us after we had a chance to move over safely.  He’s our fav because, about 5 miles after this SUV passed us, we saw the SAME driver in the SAME white SUV sitting perpendicular to the road, TOTALLY stuck in a ditch off to the right side of the road!!!!!!!!!!!!!!!!!!!!!!!!!