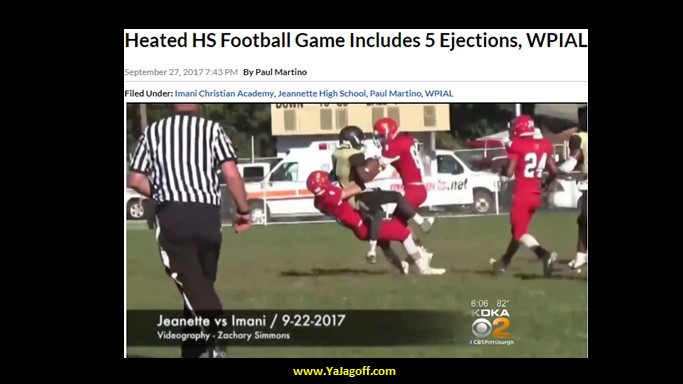 Five players were ejected, police had to be called and the refs ended the game with four-and-a-half minutes left.

The football officials were afraid for their lives.

It’s a PROUD moment for Western Pennsylvania high school sports!!  And it all happened when, supposedly, one team threw a bottle at the other team and, well, that’s how this thing escalates ALLEGEDLY and then the proverbial feces hit the Aeroacceleratom Electicus!

And what happened/happens to all of the adults.. and I don’t mean at the game… I mean loooooong before game, adults, and parents who teach respect and sportsmanship so that these things don’t get like this?

To all of you involved in this ordeal that made national “embarrassing” news, NICE WORK reppin’ da town.

Just so you all know, if we are talking about the Jeannette High and Imani Christian Academy schools,  we will continue to  refer to your schools as being “just east of Pittsburgh.”  But when we refer to your football teams, this brawl, the WPIAL hearing, any subsequent lawsuits and YouTube verbal bashings, we hope you don’t mind if all of us refer to your areas as, “up around New England Patriots Territory” YA JAGOFFS!!!