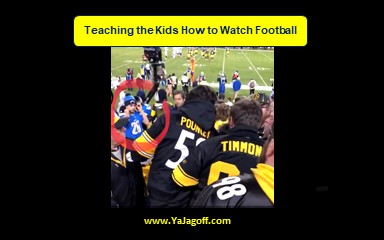 Another PROUD moment for Western Pennsylvania adulting!!  Public fighting! Yayyy! And thank GAWD it was in front of the kids!

Basically, the story is: a fight broke out at the Steelers/Chargers game the other night. Over a million people have viewed the video on line.. where 2 adult men get into an argument and, instead of working things out, going their separate ways or even shaking hands to agree-to-disagree… one headbutts the other and a fight ensues… right in front of the kids!

No report, yet, about how many “TOMLINSON should be fired” vs “He’s the winningest coach in recent Steelers history” or “Hey buddy, Hi–ya doins” transferred before the fight began.

To the adults seen fighting in the video, nice work preparing the little ones on how to handle themselves in life AND in a public “fun” place.  Fist-fights solve EVERYTHING in the world ESPECIALLY when you’re in public at something as important, and fight for, as a silly football game.

Just so ya all of ya know… when one goes to a Steelers game, you’re only supposed to go home with a terrible towel, some other random expensive souvenir, a highly priced empty “souvenir beer cup,” a bladder full of beer and a belly full of unhealthy stadium food…not black eyes, bloody lips and torn clothes, YA JAGOFFS!!!