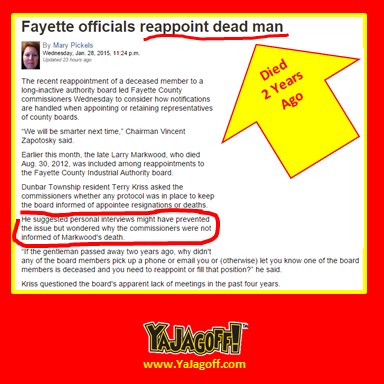 Yeah.. you read that right!  See the excerpts from the TribLive article by Mary Pickles below.

Earlier this month, the late Larry Markwood, who died Aug. 30, 2012, was included among reappointments to the Fayette County Industrial Authority board.

I’m sure he was honored. (He snickers as he types and rolls his eyes sayin’ “Oh that Fayette County.”)

“We will be smarter next time,” Chairman Vincent Zapotosky said.

Really? Ummmm…. doesn’t seem to hard to be “smarter next time” at this point.  It’s like the kid in the elementary school Spelling Bee that spells CAT correctly and high-fives the other contestants as he walks away from the microphone.

How about this question: if the gentleman passed away two years ago… WHY DIDN’T WE SEND ANY FLOWERS?  Guessing that a simple  “THANK YOU FOR YOUR SERVICE” letter from the hard-working, on-top-of-their-game Commissioners was out of the question too. (Actually, if they had sent one, that would have made this story even better.)

Authority solicitor Ernest DeHaas on Wednesday explained that the authority was very active in the 1970s and 1980s, assisting small businesses with obtaining low-interest bank loans.

Haaaaa… (snort)…. haaaaa (pee trickle)…..Seriously, the 1980s?  Should we do wellness check-ups or corpse dog searches for the other people still listed as part of the Authority? Did someone ever say, “Where in the $#@ are those meeting minutes from those lazy ARSES on the Industrial Authority? Especially that Markwood guy, he’s a real stiff.”

Hey Fayette County Comishes,  if we didn’t know that good ol’ Lar was dead and we aren’t monitoring who ISN’T attending meetings, then who IS attending the meetings.  By chance have you seen any of these people on the rosters?

Lee Nover and, of course,

Yes, you might recognize them from your high school days!  Keep sleeping at the wheel, Ya Jagoffs!

Thanks to Trib Reporter Mary Pickels for the story.