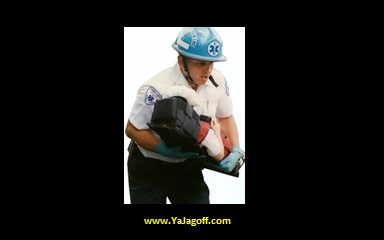 We published this last year as part of EMS Week and wanted to repost it now that we have a photo of Larry Barnes, Ross/West View EMS. It is written by YaJagoff Podcast partner, Rachael Rennebeck.  Unfortunately Larry died at an early age but cool to know that he was there to help her long before the two of us ever worked together.

In honor of EMS week, Savvik acknowledges the progression in the industry of products since its inception in 1997, but more important than the state-of –the-art ambulances, hi-tech communication software and even the boots to outfit the staff, Savvik recognizes the people.  Happy EMS week to all of the hard-working men and women in the world of EMS from first responders to dispatchers and every determined worker in between.  Enjoy a heart-felt story about how EMS changes lives.  Savvik says celebrate!

At 16 I said the words I love you to my parents, my brother, and maybe thought it about the Central Catholic junior I met weeks before at a dance in the Oakland gymnasium.  Then on October 30, 1992, I whole-heartedly proclaimed my deepest love for a man I never met until then.  But, he saved my life.

It was 7:42 p.m., PM Dawn’s “I’d Die Without You” was on the radio in the gray Ford Taurus when fear and uncertainty stymied the high school girl banter happening among the five friends in the car.   We were on our way to the Mt. Alvernia High School dance traveling the winding Evergreen Road, treacherous on any given day, let alone dark and rainy Devil’s Night.

We began to severely swerve, later to learn the axle had broken, causing us to turn into oncoming traffic, then flip after hitting a tree.  The car landed in a marshy creek on the side of the road on it’s side with me trapped underneath.  Adrenaline and fear overcame the girls who fled the vehicle, even flicking a cigarette upon departure to spark a fire near where I lay trapped, almost accepting that I was not going to make it out alive.

Within minutes, paramedics were at the scene dividing, conquering and attending to each of the girls who watched me lay there helpless.  Then, out of the crowd of EMT’s I heard, “Rachael, right? We got some new equipment, my friend, and we are using it to get you the hell out of here.  Just hold tight and trust me, okay? By the way, I am Larry Barnes.”

Little did I know that the Ross/West View EMS team had just invested in the rescue tool known as the Jaws of Life. The hydraulic-type tool dug below where I was laying and sprung me out of the small ditch I was trapped in.

I talked incessantly about the accident, giving play-by-play details about the process of the crash, necessary facts about the other girls, and directions on keeping my mom calm once I was rescued. There was never a time I didn’t trust this man whom I never saw, heard, interacted with, or met before that night. I knew his name.  I knew he cared.  I knew he was going to spare my life.  I do not know how I knew, but I knew and he did.

You may have heard about the new General Data Protection Regulation (“GDPR”), that comes into effect May 25, 2018. To help comply with GDPR consent requirements, we need to confirm that you would like to receive content from us. We hope that our content is useful to you. If you’d like to continue hearing from us, please update your subscription settings.