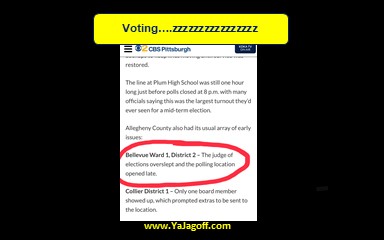 Well… we stayed up the last 36 hours! Not watching the returns but SCANNING the news for some type of election day Jagoffery and, well, the news of the day did not disappoint!

Sure, we could have posted about the people complaining about voting machines going crazy or long lines. etc, etc!! But HELLS no!! We needed something more RIDICULOUS.

Like the KDKA-TV story about a polling place in Bellevue opening up late due to the election judge SLEEPING IN!!!!!!!!

Well of COURSE most of us have slept in and have been late going to work at some point in our lives.  Some of us have even FAKED sleeping in.. giving that scratchy voice on the phone (Huuu..ummm…. hu..huollo?) when your co-worker calls to say, “Hey.. you comin’ in today?” BUT none of this has been when something as huge as this was going down: one of THE most emotional mid-term elections in our life time, that takes place ONCE every 4 years where nearly every media outlet was predicting an overwhelming voter turnout!!!!!

Do ya think the election official might have wanted to go to bed early or set 14 alarms? It’s not like he/she didn’t have any advanced notice. We’ve been watching Bull S@#T political ads for 16 months.

Hey election official, since we don’t know your name we’re gonna give you some random name like…..let’s see.. Rip VanWinkle… Rippy for short since we kinda tight!

So, Rippy, just as an FYI, there is another Presidential Election in 2 years. You have 1 year and 363 days to order some No Doz pills, 4 smart phones, a clock radio and a personal gong-banger.  And for gawd sake… even if it is true, DON’T tel us you were up late rockin’ a strong ForNight game on your XBox, Ya Jagoff!!!