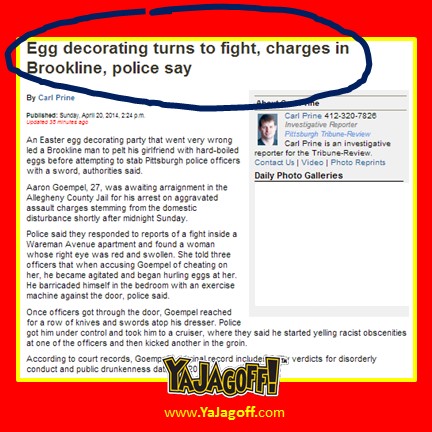 Is there not a Holiday that goes by that doesn’t have some Jagoffery associated with it?

A summary of the story:

(You can just picture it… just like the scene from the movie “Ghost.”  The two of them hovered around their Steelers, Pirates and Penguins mugs filled with those goofy little pellets and smelly vinegar.)

Lady ALLEGEDLY accuses egg-dying partner of cheating on her.

(I guess that makes him mad because, well, obviously she’s not concentrating on how to get the deepest blue on her egg or how to use that silly wire-egg-holder-thingy to get a perfect two-color egg.)

I’m also kind of anxious as to how this came up.

(I wonder if he used the invisible secret crayon and wrote his other girly’s name on it and accidentally left the egg in the blue dye too long and she fished it out with the silly wire-egg-holder-thingy and BOOM!.. there it was!  “Who in theeeeeeeeeeeeeeeeeee @#$#@% is GiGi?”)

Guy ALLEGEDLY became agitated and began hurling the eggs at his egg-dying partner.

(As long ago as I can think of, we always died what seemed to be 5-tons of hard-boiled eggs.  I have no idea who ever ate all of those things but something tells me most of them were left over and used in the that year’s official first picnic, Memorial Day, for potato salad! So, while the eggs probably hurt, really, there were probably too many of them anyway.)

Guy ALLEGEDLY locks himself into room by blocking the door with an exercise machine.

(I wonder if his had just as many clothes hanging on it as mine does. If so, he could have lived in there for 3-4 weeks and had a new outfit for every day.)

Police finally get to the guy. He’s now in jail awaiting arraignment.

(More than likely, his girlfriend and his girlfriend missed him at the Noon Easter mass and the blessing of the baskets.  But then again, there probably weren’t many eggs to bless and he doesn’t seem to be a chocolate crucifix kind of guy.)

(I am sooooooooooo tempted to end this with a stupid, “The Yoke’s on YOU!” joke but I’m not gonna.)

Hey Philandering-Pysanky-Pete….if my mom would have been there, you would have been in even more trouble for wasting the eggs then you were for cheating on your girlfriend.  As she was pulling the short hairs on the back of your neck, she would have said, “It’s all fun ’til someone loses and eye,” Ya Jagoff!