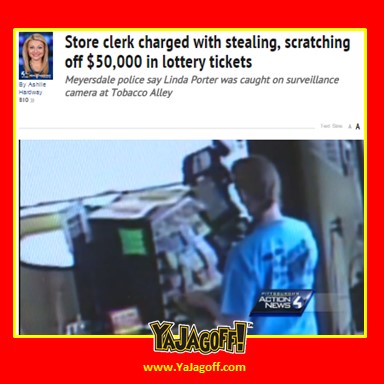 A 54-year old woman decided that she should help herself to some lottery tickets while she was at work ALLEGEDLY! Full story on WTAE.com.

It’s kind of just like when you decide to take one of the pens, sharpies, an envelope or a pack of paper from work (based on the thought that they will never miss that one little thingy).

But it’s not EXACTLY just like when you decide to take one of those pens, sharpies or an envelope or pack of paper from work because Lottery-Linda ALLEGEDLY helped herself to $50,000 worth of lottery tickets from work.  Something that’s tracked a little more strictly than the work-place thievery pen that is currently in your kitchen junk drawer.

I have to tell ya, I realize that I’m no MENSA candidate but, one thing would be obvious to me if I was a cashier: I’d be smart enough to realize that, when balancing things out at the end of my shift, I should probably have dollar bills in my cash register that would be equal to the number of sequentially-numbered-state-regulated-closely-tracked-and-traced scratch off lottery tickets missing.  Oh, sure.. I might have a bad day and be off by a buck or two every once in a while.  But, to be off 500-600 tickets a day 30 days in a row?  AND these mishaps only happened on the shifts that I worked?

The final “Drop the mic” point…. she knew that there were video surveillance cameras in the store.

Linda, Linda, Lottery-Linda….what were you thinking?  Did you think that lottery tickets were accounted for like those grocery store produce/vegetable bags that come on a gigantic roll?  Not a soul realizes that I go through 50-75 of those things before I finally get my 4 apples in one that I can open!

The police are now on to ya.  Your name is now all over the news and your boss is now mad at ya. But… you know who is REALLY going to be the maddest?  The relatives and friends that exchanged gifts with you!  You know, the ones that gave you some kind of $40 gift card or purse or sweater… and now know that the 40 lottery scratch offs that you stuffed into that la cucaracha musical card for THEIR gift…you didn’t pay for!

Good luck in jail or whatever happens… and.. if you need to raise funds for your defense, since you probably have extensive experience in how to scratch off that gray stuff from the tickets, we suggest that you produce an official, autographed and endorsed Lottery-Linda Scratch-off tool hickey-ma-doo.

You’d be a millionaire within months, in a LEGAL way, Ya Jagoff!