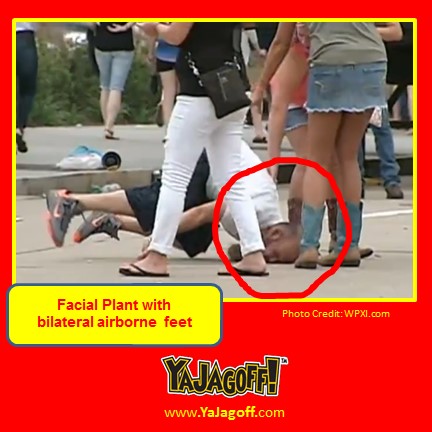 Look mom, NO HANDS (to put out in front of me to protect my head and face from making direct contact with the concrete while I am drunk)!

They forget all sense of what happens to garbage… (like, they probably DON’T throw it on the floor at home)

The fan-base looks like morons despite, probably most of them, were decent human beings

But then ya have my man… who has too much to drink and, clearly NO FRIENDS.  Because, I would have to think that if I got THIS drunk in front of MY friends, they would throw me in the back seat of a car and duct tape me to it for my own safety while they carry on with their celebration.

So this guy’s friends let him wonder off…. and from the looks of it, he’s doing a great audition for a Cirque du Soleil troupe.

Watch the 6-second version of my man doing a very good, I mean, even a 10 from the Russian Judge good, face plant into the cement.

This dude WILL be the topic #jagoffs blog post #IRememberMyFirstBeer https://t.co/mBLZ6yLhvd

Hey “Puke Bryan,” what a proud moment, heh?  Thank goodness you were able to get up!  Otherwise you might have been hidden under the 5-feet of garbage left by some of your drunk, idiot, no class, can’t-handle-my-first-beer, I-like-those-restaurants-that-allow-patrons-to-throw-peanut-shells-on-the-floor, an-overused-concert-porta-potty-is-cleaner-than-my-bathroom-at-home buddies.

By the way, your prize?  We just paid to register you into the Monty Python Ministry of Silly Walks AND you’ve won for best graphic depiction of the evolution of man, stage 3 (3 steps outta the pond and kinda hunched over) Ya Jagoff!!