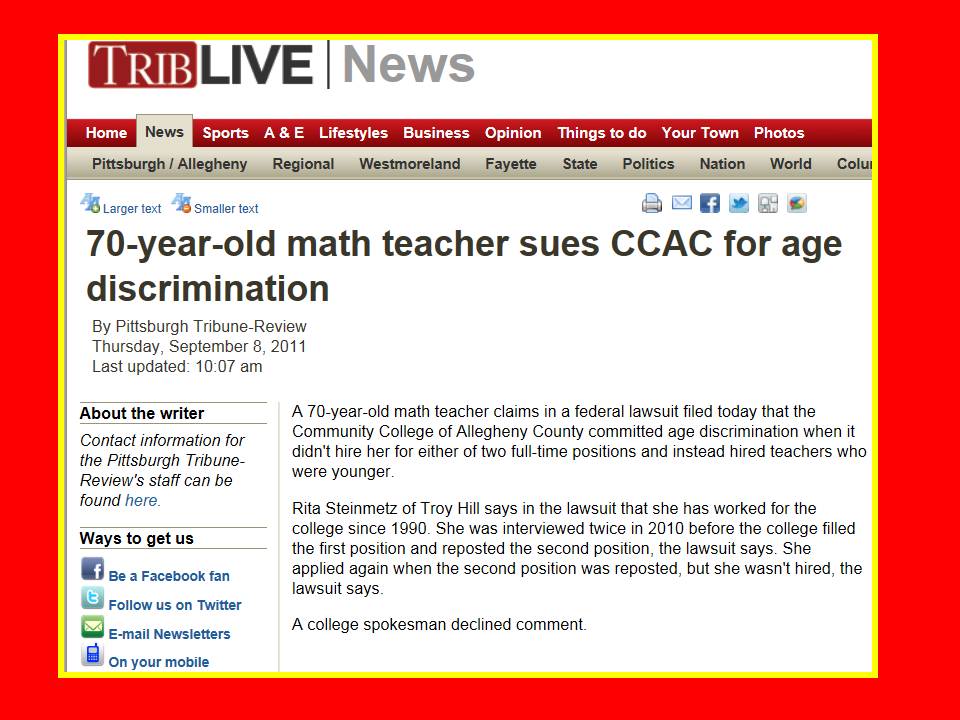 TO BE CLEAR:  We believe that you should ALWAYS be respectful of elders.

But this lady, seriously, has she nothing better to do?  It seems that Rita Steinmetz is claiming that she is being discriminated against simply because she was one of who-knows-how-many people that DIDN’T get one of only 2 full time math teacher positions at CCAC on the North Side.  Scuttlebut WE hear is that one of the KEY points in the suit is that she believes she is actually OVER qualified because she knows how to teach ABACUS at the 400 level.

But SERIOUSLY.  A lawsuit?  I mean,  70 is not a sentence to sit and rot away in a rocking chair but A LAW SUIT????   Rita-pita, any idea how many math teachers are outta work and probably interviewed for these jobs?  We’re thinking that there were probably 150 unemployed History teachers ALONE that applied for the jobs saying they were “good with numbers” just to get a paycheck.  But YOU, Rita, were discriminated against??

Rita-pita, don’t ya think its time to relax, go to Silver Sneakers a few times a week, walk in new white tennies at Ross Park Mall, bake some cookies, drive slowly in the fast lane during rush hour, take 3 cruises a year and maybe get one of those “name tag” jobs at the Mickey D’s around the corner from Ridge Avenue?  We don’t mean to be disrespectful to an elder but, isn’t there an easier way to pay for those afternoons at the Rivers Casino other than a frivilous law suit, Ya Jagoff?