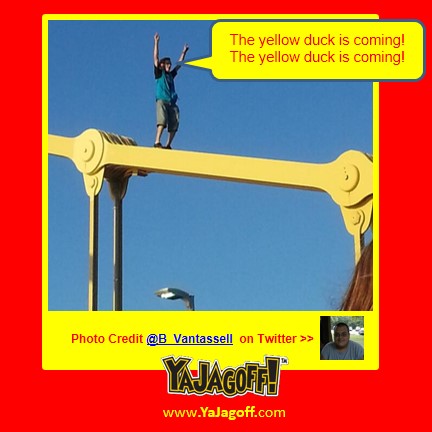 A 40-foot Rubber Ducky has come to Pittsburgh.  It is here until October 20th.  But it will take us months beyond that date to figure out why in theeeeeeeeeeeeeeeeeee hell we all getting so goo-goo over this thing.   It doesn’t move like a Disney animatronic thingy.  It doesn’t have a hand-held remote control that you can use to make it dance, swat at Angry Birds or talk.  But we love it!

We love it to the point that Downtown Pittsburgh was PACKED with people, like the Super Bowl parade we won’t have this season, who wanted to catch a glimpse of the duck.  They even closed down a bridge and partied with DJs and chicken-on-a-stick for a Duck Welcoming Party!

We’re crazeeeeee for the rubber duck.  But nobody crazier than my man, who climbed the Clemente Bridge to get a better view of.. yeah.. a 40-foot duck that’s going to be able to be seen for the next 3 weeks!  Isn’t that like saying ya need to be in the front row for a fireworks show… that, by the way, happens IN THE SKY???

Not sure how many nights ya spent in jail from that stunt but, we’re pretty sure famed attorney Jimmy Ecker would get ya an outta jail free card, if you admit you were up there getting ready to jump because of the Steelers season.

Either way, for self preservation like someone who turns into a werewolf on a full moon, make sure you stay home if the Pirates win tonight’s playoff game…chain yourself to a porch post before the end of the game if ya have to.  Cuz we’d hate top see what 20 years of pent up baseball energy will make you do, Ya Jagoff.

Thanks again to Brandon Vantassell from Twitter for being our Honorary Jagoff catcher today.