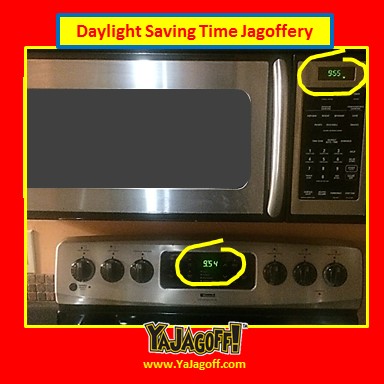 If you’re late for work today and you claim “forgot to change my clock” as an excuse, we’re calling the Bull$#@ card on ya.  Just about everything re-sets itself these days… except of course, battery operated clocks and the microwave and stove. Why does the microwave need a clock anyway?

By the way, if you say you’re exhausted because you lost that hour of sleep over the weekend, again, calling the Bull$#@ card on ya.

And how about the work-time lost due to DST… we know about the March Madness people wasting time at work but how many work-hours are lost by people standing around the office last Friday searching the internet and arguing over the “Is it spring FORWARD?” question!

And, ya know how you go to a Penguins game and some first-timer thinks he’s gonna be funny buy yelling, “How much time is left?” just as the period clicks down to the one-minute mark and then the PA guy announces, “One-minute remaining in the period… one minute?” I guran-dam-tee that, if you were awake around 11pm-midnight, you or someone that you were with, looked at the time and said something like “yeah but it’s REALLY midnight cuz we change the clocks ahead.”  I’m  also fairly certain that’s the same person that, just a few weeks ago walked into work and asked, “Cold enough for ya?”

By the way, it is NOT “Daylight Savings Time.”

But the biggest jagoffery associated with Daylight Saving Time? The mismatched stove and microwave clocks. Each year, I dress in my clock-changing combat gear including Gatorade-filled-camel-pack, and prepare to do battle with the appliances. Like a NASA astronaut, I run through repetitive scenarios practicing the motions of changing each clock individually. And then I load my pointer fingers like an old-western gun-slinger and go into battle.  With various yoga moves, non-yoga moves, face scrunches, a choice of swear words and some tongue-biting, I try to get the microwave and stove clocks to match.  I cannot rest until they match. Typically, after a fair amount of stress sweat and painful finger tips, I get them and then I stand down until October!  Yes, I safely secure my appliance battle gear under lock and key because there are children in the home!

Whyyyyyyyyyyyyyyyy do we put ourselves through this??  Some say it’s the government and an energy thing, some say it’s a Farmer’s Almanac thing and, quite honestly, most people have no idea and make stuff up!!!  Look, I just got used to writing 2015 on my checks.  Thank GAWD I don’t have to write the time of day on anything or tell time via my stomach or dog’s stomach. Can we PLEASE lose this stupid clock-changing stuff, Ya Jagoffs?