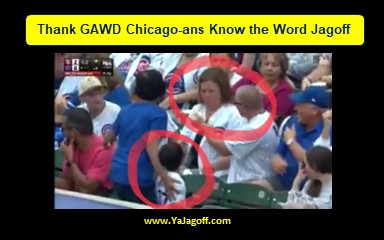 For some time, folks from Chicago have tried to claim the word “Jagoff” as their own…saying it is a “Chicago word!”  Of course, we said NO WAY!!

But thankfully they know what the word means.. at least they negative connotation of the word.. because it fits perfectly here. And, while we always say this blog points out those people being jagoffs around the Pittsburgh area, we just had to post this one!

If you haven’t yet, see the video of what happened here.

“first base coach Will Venable tossed a baseball to a young fan seated in the first row, the ball got away and bounced beneath the seat. That was when a middle-aged man in the second row grabbed the baseball and gleefully handed it to the woman next to him.”

Be careful.. because if you watch the video, you may lose faith in all of humanity when you see the little kid miss the tossed ball, it goes to the ground and the 40-ish year old tank-of-a-guy picks it up the ball, looks at the kids staring at him and then proceeds to give the ball to the wicked witch sitting next to him (who gets overjoyed at her man’s manliness of sucking the life out of a little kid’s dreams.)

Hey tough guy… hoping that baseball was all worth it. Your grinch of a face is plastered all over social media.. like here. A couple of baseball-fan rules should apply here:

QUICK NOTE: The Cubs organization was awesome and gave the kid 2 baseballs and all kinds of stuff! The Cubs ain’t Jagoffs…. at least until we see them in the playoffs!