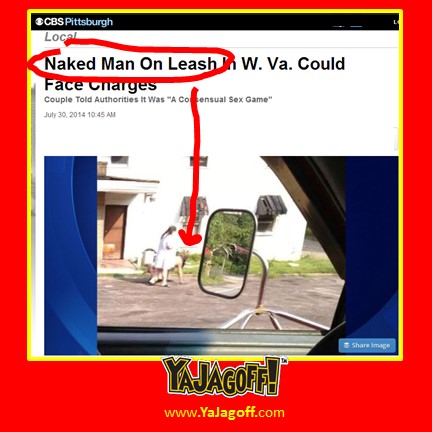 A Washington County, Pennsylvania couple did their best to NOT embarrass the rest of us from Western Pennsylvania by moving their private activities to West Virginia but…..

BJ Geardello and her doggy “best friend,” Robert Deyell, took their kinky stuff to a busy intersection of US 40 in the Triadelphia.  He was naked crawling on all fours with her in a robe walking him on a dog leash.

Ya see.. today, everyone has a camera phone and.. well….it ended up on the internet.

As it turns out, both admitted to just being into some kinky sex.  Police actually checked over Robert to see if he had been injured from crawling and from the shackles.  He was reported to be fine other than your standard Labrador Retriever hip dysplasia symptoms.

The best part of this story was how fast the West Virginians were tossing this story back across the border like a hot potato.

(Clear your throat and read this in your best stereotypical West Virginian old uncle voice) “Wazn’t one of ahrs!”

Despite BJ and Robert’s best efforts to cloak this activity in West Virginia any-thing-goes lore,  the West Virginia big-wigs were FAST to point out that these two were from Pennsylvania.

BJ and Robert… God bless ya on your desire to stay active and have some fun.  But paleeeeze, if you’re gonna do that again, could you please take it inside a Florida or West Virginia WalMart where that kind of stuff is standard practice and nobody would even THINK about taking your pictures or turning you in, Ya Jagoffs?